If you are unlucky person, such as yours truly, then you will probably have to wait until August 29th to play Sonic Mania. That’s right, Sonic Mania on PC has been delayed until August 29th, all other console versions will launch on August 15th as normal. I guess I will have to purchase the game on consoles, digitally, to play it without it getting spoiled. I’m pretty sure SEGA and the people working on Sonic Mania didn’t want to delay it, its just how game development go.

The news was given out during the Sonic the Hedgehog live stream over at Twitch. Another bit of news was that 26 copies of the Sonic Mania Collectors Edition will be signed by Takashi Iizuka and Kazuyuki Hoshino of Sonic Team. Good luck with that one. Aaron Webber did say that all Sonic Mania PC pre-orders will get Sonic the Hedgehog on steam for free, which happens to be the non-Chrisitan Whitehead remake. It sucks, its nice that they are trying to give out a free game but is it enough? Sound off in the comments, what is your thoughts on Sonic Mania being delayed only on PC? 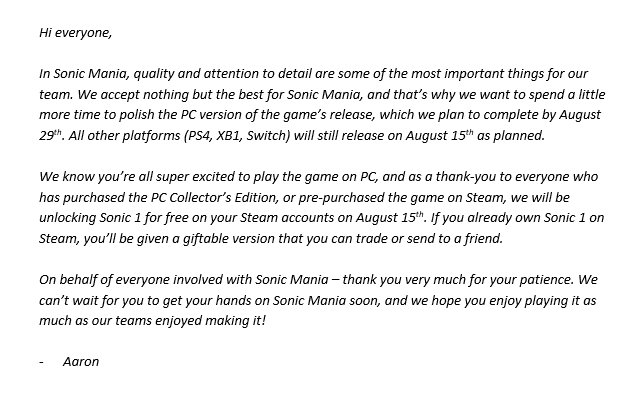 5 responses to “Sonic Mania delayed on PC until August 29th”