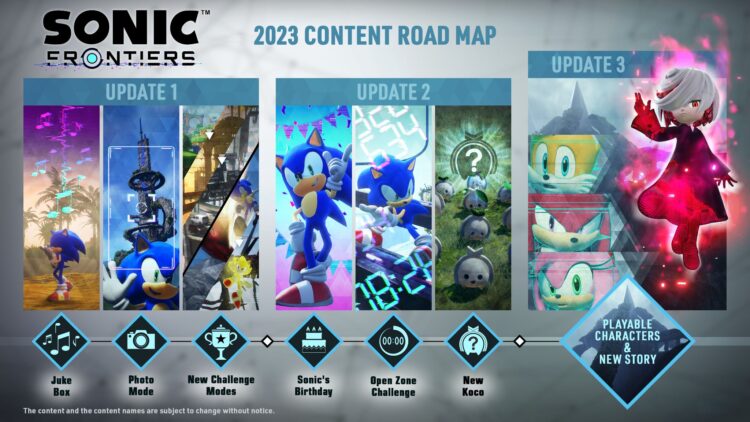 From the image, we can glean that Update 1 will see a juke box mode where players can select music to listen to as they play, though it is unknown if this will be music from the Frontiers soundtrack or from past games. Also, a photo mode will be included, complete with Sonic mugging for the camera. Finally, the much requested boss rush mode appears to be confirmed in a new challenge mode which will see cyberspace rush modes as well as the ability to play through each island’s sub bosses and end boss.

Update 2 will see a Sonic birthday event, so expect this one on June 23rd or in the month of June, as well as open zone timed challenges and a new Koco.

Update 3 brings the most exciting content, as they promise playable characters and new story. Could this be something taking place after the game’s ending? Or perhaps we will see that Knuckles, Tails, Amy and Sage were up to in cyberspace?

Kudos to SEGA for making this free and really delivering on DLC for the next year! Can’t wait until 2023? SEGA has also confirmed Christmas DLC which hits December 21, 2022!