On Thursday, December 15th, Sega has added 4 more of their own Genesis classics to the Nintendo Switch Online + Expansion Pack online subscription service. Alien Storm, Columns, Golden Axe II, and Virtua Fighter 2 are immediately accessible after updating the Sega Genesis – Nintendo Switch Online app to it’s latest version. Japanese players get the same four games in their own update as well, and this is despite the fact Virtua Fighter 2 Genesis did not originally release in Japan. (Although it was developed by Sega of Japan.)

Of course, these four games are all some of the usual mainstays in Sega’s many Genesis compilations, including the Sega Genesis Classics Collection also available on Switch and other consoles, (Golden Axe II is also on the recently released Sega Genesis Mini 2) so chances are many of you are already quite familiar with these games. If you still wanna hear me ramble on about what these games are, then make yourself comfy and check in after the break. 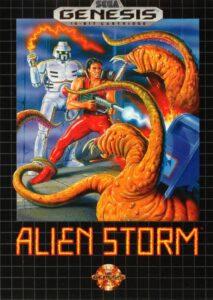 Alien Storm (1991) is a conversion of the arcade game of the same name by Team Shinobi and the same Makoto Uchida who also created Altered Beast, Golden Axe, and Die Hard Arcade. You play as one of three characters, either by yourself or with a second player, to battle against armies of alien invaders terrorizing the human race in present day (Or what was present day in its time) Earth. It’s gameplay is exactly the same as the arcade game, but its levels were rearranged. Like Golden Axe, it is a scrolling beat-em-up. It creatively mixes up its gameplay with first person levels where you fire at aliens with reckless abandon as they rush toward you and attack. The game is rather simple in its design, but if you enjoy beat-em-ups, this is one of Sega’s better examples on Genesis. It should be simple to jump into if you’re used to what Golden Axe is like. 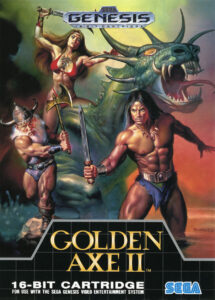 Speaking of Golden Axe, Golden Axe II (1992) is the official sequel to Golden Axe, or at least the one accessible to Genesis and Mega-Drive. Ax Battler, Tyris Flare, and Gilius Thunderhead return from the original game to do battle with the evil Dark Guld, himself very similar to the last game’s ultimate foe Death Adder. In fact, Golden Axe II is so similar to Golden Axe that you may struggle to notice any differences between the two games besides the new locales our heroes travel through. Of course, certain exploits from the first game have been removed, so it’ll be harder to trap enemies in constant dash attacks like the first game, as an example. You can also play with a second player and The Duel mode is also available for you and your friend to fight each other just like before. Golden Axe was also part of the initial launch lineup for Sega Genesis – Nintendo Switch Online, so play them both and decide for yourself which one is better. 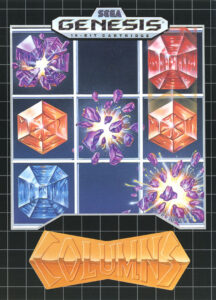 Columns (1990) is the premier puzzle game for the Sega Genesis and a port of the arcade original. Three vertically stacked colored gems will fall from the top of the screen. Your job is to arrange them so that three or more of the same color line up vertically, horizontally, or diagonally to clear them out. You’ll get extra points for creating chain reactions of like-colored gems matching up after they fall when other matches are made, so you may be tempted to plan accordingly so you can truthfully brag that you made that happen on purpose. Don’t get too reckless, because when the gems reach the top of the play area, it’s game over, as you’d expect. The Genesis version includes a Time Trial mode (Accessible as an extra part of the Genesis version’s Original Mode), which is a sort of “Caravan Mode” where you have three minutes to quickly build up the highest score possible, and a Flash Columns mode, where you have 3 minutes to clear a flashing gem placed somewhere in the play area and your score bonus gets higher the faster you can get to it. You can also play against a second player. When you feel like giving your brain an exercise along with your reflexes, this is the game for you. 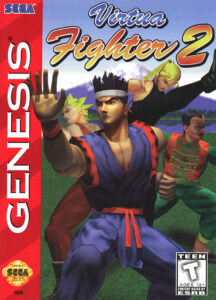 Of course this is not the Saturn or arcade version of Virtua Fighter 2, much to the dismay of many of you reading, I’m sure. Virtua Fighter 2 Genesis (1996) is a 2D conversion of the 3D fighter that plays much closer to the original than you might think. It’s not without its cutbacks, however. Most of the stages are gone and Virtua Fighter 2’s new characters, Shun-Di and Lion Rafale, are excluded from the Genesis game. All that said, this is still a Virtua Fighter game through and through, so the remaining characters’ moves are still there and executed exactly as you remember from the other versions of the game. Be sure to enable 6-button mode in the options menu to enable the X, Y, and Z buttons for pre-determined combinations of the Punch, Kick, and Guard buttons to help with activating certain attacks or counters, though if you are playing with Nintendo’s official 3-button Genesis controller for NSO, this will be pointless. Virtua Fighter 2 is also notable as Sega’s final non-sports game developed for Genesis/Mega-Drive, with the European version releasing in 1997. Only the 60hz Genesis version is on NSO+EP. This game should prove an interesting curiosity to Virtua Fighter fans (In fact, I really the YM 2612 conversions of the game’s music), but it won’t be much more than that to anyone who’s experienced Virtua Fighter 2 on Saturn or in the arcade, either one being a much truer Virtua Fighter 2 experience. As a fighting game on Genesis, however, it’s still a good time and the Genesis had much worse options for sure.

The previous Genesis update to Nintendo Switch Online + Expansion Pack released in September and consisted of Alisia Dragoon, Beyond Oasis, and Earthworm Jim.

If you’ve made it this far into the article, then thanks for indulging me as I explain these games that you’ve likely played a hundred times before. Be polite and say “You’re Welcome” in the comments below, and then tell us what you think of these games and what other games you hope to see added to Nintendo’s online subscription service.