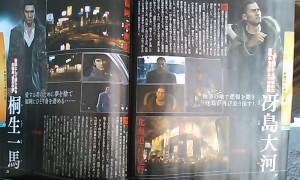 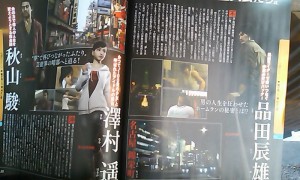 So we have two new playable characters and one of them is Haruka? Yes, the little girl you rescue in the first game and take care of throughout the series is now a playble character. Intresting? Hit the jump for more details on the title.

Even though Haruka is announced as a playable character, it isn’t confirmed how she will play. It doesn’t seem like she would be that effective in a fight, so maybe her bits deal with more of the exploring aspect. So far SEGA is hush on details.

The other playable character, Tatsuo Shinada, is a former baseball player. He was banned from playing baseball due to being caught gambling. It seems that he might have been innocent of the whole thing. In the game he suffers from debt.

The story in the game will follow the events of Yakuza 4 since Yakuza: Dead Souls is a spin off and not part of the series’ story line. In the start of the story we have our main man Kazuma Kiryu sporting some black clothes in Fukuoka where he got a full time job as a taxi driver. Yes, some Crazy Taxi stuff. Soejima is serving a three year prison sentence, and that is where he hears that Akiyama has come to Osaka on a business trip. Haruka is also in Osaka, leaving Okinawa behind because she wants to become an idol. Which is also my dream, by the way. She lives on her own and practices her singing and dancing; she hopes that a talent agency will give her the break she is looking for. Sadly for her, they have other plans.

The full title of the game in Japan is Ryu ga Gotoku 5: Yume Kanaeshi Mono (rough translation: Yakuza 5: Person Who Fulfills Dreams). In an interview with Famitsum it is revealed that the game has had double the development time of the other Yakuza games this generation. Also the script/scenarios in the game are the most dynamic  yet seen in the series. Exploring the city and getting into a fight will also be seamless and the controls have been revamped. Sounds very exciting.

The game will also feature five cities, which were already confirmed back in November. Those cities are Sapporo, Tokyo, Nagoya, Osaka and Fukuoka.

The biggest improvement you will see in Yakuza 5 is the graphics. Toshihiro Nagoshi has confirmed that this new title is running on a brand new engine. The last ‘new’ engine we saw from his team was Binary Domain, which had great visuals in my opinion. Nagoshi explained that Yakuza: Dead Souls marked the end of the series and what the developers had worked up to that point. Yes, that including the engine, which has been completely scrapped. He said that Yakuza 5 could have been given the title “New Yakuza” since that is what they set out to do.  Even though he talked about the series being ‘new’, all the old trademarks of the series are still back. That includes free roaming the city, battles, and playing mini games. Of course Nagoshi stated this will have the most content compared to the past games. I could have guessed that one.

Yakuza 5 is 70% complete at this point. It is planned on being released this winter (December).