The internet has gone into a tizzy over the news that SEGA has taken game company Level-5 to court, claiming Level-5 has infringed on two patents held by SEGA. SEGA claims that the Level-5 developed Inazuma Eleven games infringe on a patented mechanic which allows players to move characters with their fingers or a stylus. The lawsuit, if won, could prohibit sales of all eight Inazuma games on the DS, Wii, and 3DS, as well as win SEGA 900 million yen (roughly $11 million). Internet sites from Joystiq to Kotaku are reporting on the story, though in my opinion they are jumping the gun when it comes to the details of the lawsuit. For starters, following the news, Level-5 responded by stating that the first Inazuma Eleven game was released in 2008, while Sega didn’t file its first patent until 2009. Level-5 also claims that the second followed in 2011. “As a result of examining these discrepancies,” Level-5 stated, “we’ve concluded that there is no patent violation.”

So SEGA is in the wrong! Those selfish, money grubbing jerks. Why are they hurting poor little Level-5? Didn’t SEGA die with the Dreamcast? SEGA hasn’t made a good game in years. I kid, those previous five sentences are not my opinions at all, though they are opinions one will find all over the comments sections at sites like Joystiq, Kotaku and at NeoGAF. Putting aside the fact that SEGA’s current games have nothing to do with the lawsuit, the problem is that for the most part, major news sites aren’t reporting specifics. Such as the details of the patents or the exact dates they were filed. As is, readers only have a vague mention of touch screen controls and Level-5’s insistance that SEGA filed the patents after the Inazuma Eleven games released. Digging through various websites brings up a few details not reported at Kotaku, such as SEGA patent diagrams that appear to be very similar to the Inazuma Eleven games and dates that include 2004, 2008 and 2011. 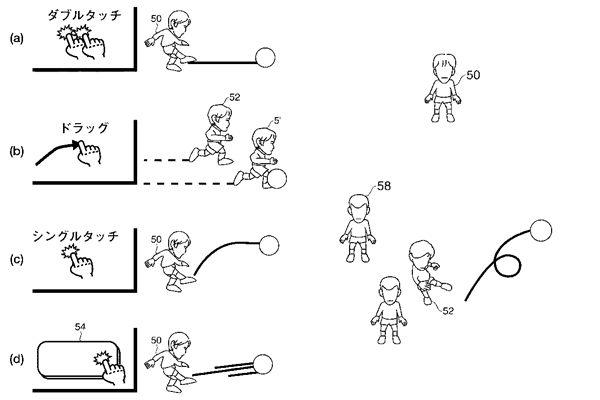 The above images come from patents filed by SEGA, and after watching some Inazuma Eleven gameplay videos I can see the similarities. Patent details are in Japanese, and an online translator is hardly the tool one should use when reading something as important as make-or-break patent lawsuit details. Still, going from the images, the patent appears to be MUCH more than simply “touch screen controls”. If it were that simple, as others have stated, then SEGA should sue every DS game in existence. Regarding the dates, it is difficult to tell from the information given when the patents were filed and if, possibly, these were renewals of older patents. If SEGA took things this far, surely they know something that Level-5 isn’t telling the press, as suing over a patent that is a year after the fact seems far too obvious a detail for a team of lawyers to miss.

I think the most important things to take away from this story, as it stands now, is that we really don’t know all the details and neither do major gaming news sites. Before we take sides, all the facts need to be known including the specifics of the patents and the dates in which they were filed. While many may disagree with the action of patenting things like gameplay mechanics and control schemes, believing it impedes on innovation, the reality is that gameplay mechanics and control schemes CAN be patented, and until the laws change companies have every right to sue. Whether or not they succeed in a lawsuit should fall on facts like filing dates and patent specifics, and like I’ve repeatedly stated: WE DON’T KNOW ALL OF THESE DETAILS.

And until we do, don’t be an idiot spreading word that evil old SEGA, who left the console market, are attacking poor little Professor Layton.