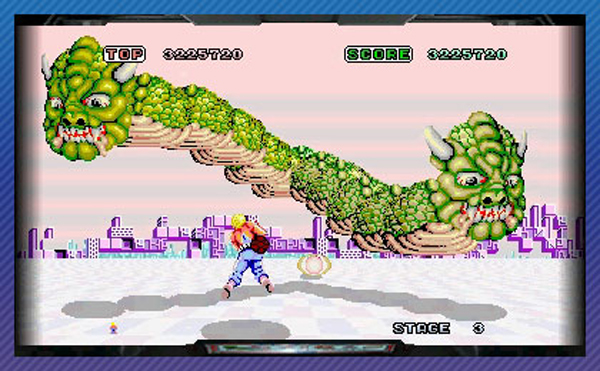 SEGA’s recently launched Archives site reveals more details of the 3D rerelease of Space Harrier, including release date, price, features and more. The game is set to release on December 26th in Japan, for 600 yen (about $7). According to a translation of the site, features include: the ability to put in credits to increase your playtime, stage select screens, the ability to save the game at any time, the ability to save and watch replays, control with either the circle pad or the d-pad or the touchscreen, change difficulty, change the number of lives you start out with, change rate of fire, a time trial mode, change the range of movement, an enhanced sound test and a variety of screen sizes (seen below).

Perhaps the most interesting feature is, what appears to be, a mode which simulates the arcade experience: “When ON, the game screen is tilted up, down, left and right according to the movement of the player.” Environmental sounds also play, which are said to simulate the various sounds that were heard from the arcade machine based on the movement of the player. For an idea of what that might feel like, check out a YouTube video of the arcade machine in action after the break.

No details have been given on a Western release, but when we hear something from SEGA we’ll be sure to share it! This is looking to be a truly awesome rerelease of a SEGA arcade classic.