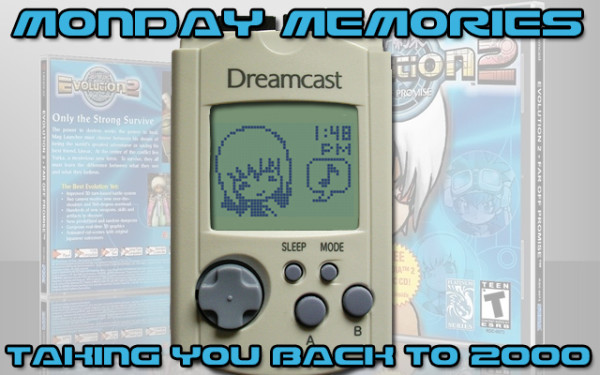 ‘Sup y’all? Welcome to another episode of Monday Memories! Last week I discussed Evolution: The World of Sacred Device, Sting’s RPG for the Dreamcast launch. As a kid who was new to Japanese RPGs, I found it to be a fun and memorable adventure; though to Japanese RPG fans at the time, it was probably more along the lines of, “that lame dungeon crawler those Dreamcast owners are stuck with while we play Final Fantasy VIII.”

The Dreamcast would of course go on to see many far more developed Japanese RPGs by the end of its lifespan, but Evolution 2: Far Off Promise is one that I’d say deserves the “you tried your best” award by stepping up to the plate and offering some big improvements over its predecessor. As a little kid, my mind was blown.

To say that Evolution didn’t exactly set the industry on fire may be an understatement; its tiny town was seen as laughable, its randonly generated dungeons were a chore, and the difficulty was all over the place. Where the game impressed, I’d say, was in its charm and its characters, and Evolution 2 brought them back into the action almost immediately. Mag Launcher and his crew began Evolution 2 on a train, leaving the tiny Pannam Town behind as they set off for the city of Museville. The feeling of upbeat “adventure” was there from the start; these games are so dang charming. The action started off immediately as bandits jumped aboard the train and a battle ensued, and I was hooked instantly.

The improved presentation definitely helped. Evolution 1 featured no voice acting, while Evolution 2 saw some (capable) Japanese voice actors take the reigns, and they added even more personality to characters who already had plenty of it to begin with. I could tell right away that this sequel would be far bigger and better than the original, and it was. 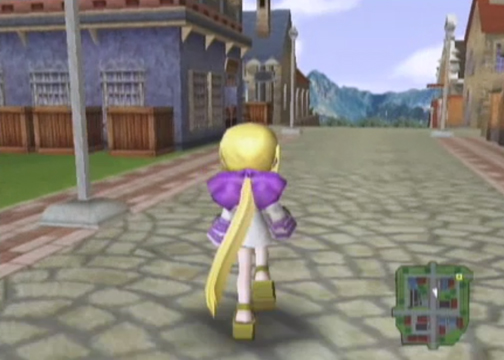 The feeling of adventure continued as my characters stepped off the train platform and into the (much larger) town of Museville in search of their hotel. That they were so far away from home, and that, already, more action had taken place than it had after several dungeons in the original game, was something that struck me very quickly, and I was psyched to see what would happen next.

The dungeons in Evolution 2 were a mix of the randomly generated and the scripted, and you no longer accessed them in a nonlinear fashion. Though still not what I’d call great game design, the dungeons were at the very least more visually interesting than those in Evolution 1, and the game was far better paced, even if it more or less followed the original’s formula to a T.

The storyline, which took place in cutscenes between dungeons in a similar format to the first game, was one that I found far more compelling, as it centered on a mysterious new character, Yurka, who paid visits to Linear late at night on the hotel’s balcony. Linear soon became drawn to him, and the relationship that developed between them become more and more intense as Yurka’s role as a villain was solidified. The storyline was certainly not Shakespeare, but Yurka made for a great villain.

The combat system wasn’t given much of an overhaul, but bosses no longer leveled up with you, which was nice as far as a more manageable difficulty was concerned. 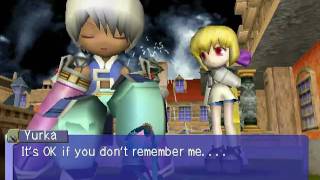 The Evolution series of games is not one that I would recommend to everyone. Even people who love everything Dreamcast-related should proceed into them with caution. They were games for kids, and for me they served the purpose of hooking me into the genre. Evolution 2: Far Off Promise was a sequel that felt so much better than the original game because it took everything I loved about it (the characters, the “feel” of the town, the music in the dungeons, the storyline) and brought them back in a far more epic fashion. There’s no doubt that the gameplay at its center (the dungeon crawling and combat) remained basic and somewhat tedious at times. But the game surrounding it was a lot of fun, and I think if you’re forgiving, and if you go in with the right expectations, you can get a lot out of Evolution 2.

Even going back to it now (and far more than the first game) Evolution 2: Far Off Promise serves up great memories for me of the Dreamcast era, an era which seemed like such a simpler time.

Before we close this up, one final taste of the game’s awesome soundtrack from the Icy Crypt Maze:

7 responses to “SEGA Memories: Evolution 2 – A larger and better adventure”