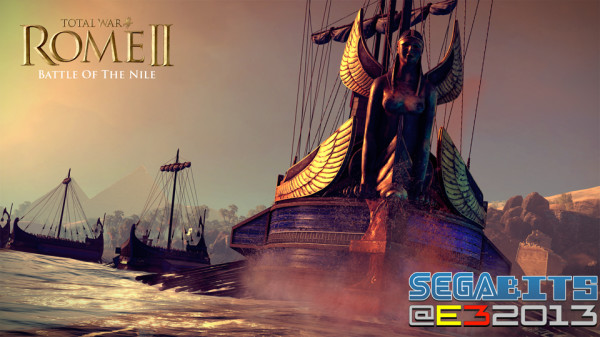 I have a confession to make: I am not very good at real time strategy. I have always been more of an action gamer, so strategically placing units and managing resources are not things I have much experience with. That said, I do have a few dozen hours of experience with Total War: Rome, so when it came time to choose between Company of Heroes 2 and Total War: Rome 2 this E3 I knew there was only one I could write about with any degree of competence. Though I will make it clear now: if you are looking for detailed impressions of the many changes made to Rome 2, look elsewhere, as the only other Total War game I have ever played was the original Rome and I was a very casual player.

Have to say, I’m happy with my choice. From what I saw in the presentation, Rome 2 looks like it will be a pretty serious improvement over its predecessor. Your cities are a lot more detailed now: instead of your cities simply changing their appearance as they grow, the cities now actually grow and evolve. The changes made to your cities can now be seen visually as they develop over the course of the game’s 200 year campaign. In addition to this it sounds like city management will now be more streamlined. Rather than having to micromanage each individual city, you can now manage all your cities from your capital. 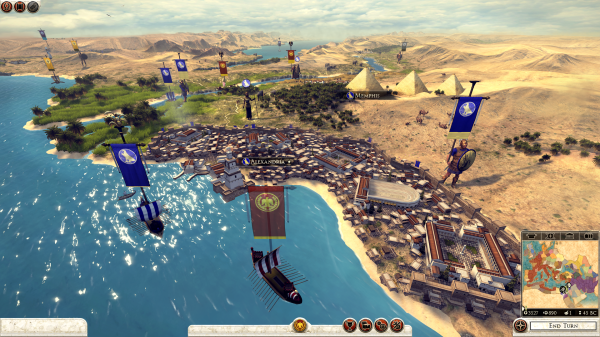 Family relations also have more depth than they did in the previous game. Here, each family has its own internal power struggle as different members within the family vie for power. Finally, there are now also people who can either hurt or help your interests in the Roman senate. As demonstrated during the presentation, you can attempt to deal with these senators by either backing them (provided they support your interests), discrediting them, or assassinating them. Creative Assembly’s presentation opted for the latter, though warned that if an assassination attempt failed, the senator would redouble his efforts to oppose you.

During the presentation, most of the new features shown dealt with the over world map and diplomacy, but there was new feature shown that had to do with units: traditions. In Rome 2, units can have “traditions” that act as buffs to allow certain units to specialize in certain tactics or operations, such as taking cities. That’s not the neat thing about traditions, though. No, the neat thing is what happens if a unit you have invested a lot into is wiped out. Instead of the unit simply being dead and buried, new men can be trained under that units banner, and the unit’s traditions are carried on under the new recruits. I was never particularly attached to a given unit in the original Rome, but it sounds like I may be able to get quite attached to units in this one, especially since these units can be revived and their traditions carried on. In addition to traditions, Champions have also been added. These champions are able to go to battle on their own and are much stronger than traditional units. They can also be merged into units and act as drill sergeants, improving troop training and morale. 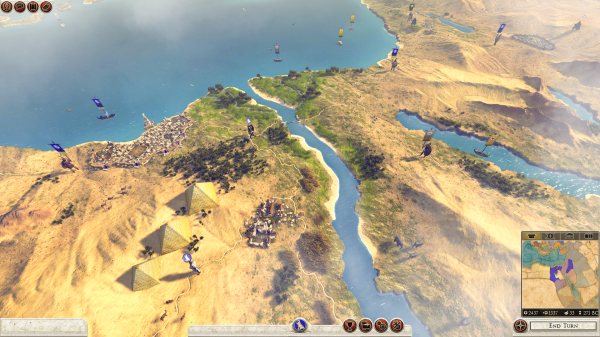 After the presentation, we were finally allowed to actually play the game. The demo threw us straight into a battle between Rome and Egypt, instigated by Rome moving units into Egyptian territory. For all of the innovations and changes shown off in the over world map, the battle system felt very familiar. In fact, as far as I can tell it’s changed little since Rome, which is great given how accessible Rome’s battles were. The biggest changes can be found in the battle’s presentation: the battle starts out with a very well done cinematic that shows off Rome 2’s beautiful landscapes and gives the player all the information they need regarding the enemy’s position and potential strategies. Provided this presentation is present in all the battle and not just certain ones, they should help give Rome 2’s battles an extra bit of gravitas that Rome’s could sometimes lack. It will also prove very useful for strategy noobs like me who need an adviser to tell us how we should consider approaching a battle.

The battle was a lot of fun, though I quickly lost the first time around. I had difficulties directing my ships as I attempted to land my troops, so I lost a good portion of my force very early on. From there it was just a matter of my remaining force being wiped out by the Egyptian’s superior numbers and defenses. By the second time around I was doing a lot better, though. When the demo ended I was in the process of successfully landing my troops to the rear of the Egyptian forces. It’s a shame the demo ended when it did, because I think I might have been able to crush the Egyptians and win after learning how to control the ships. 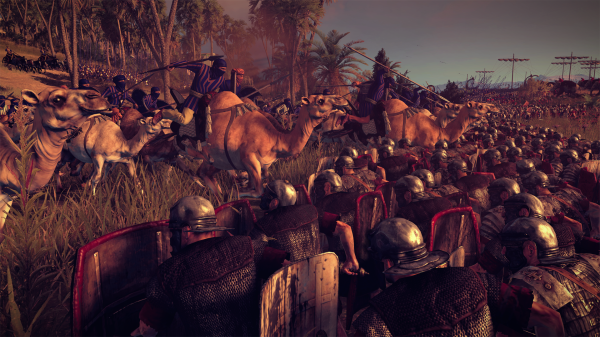 Really, that’s the great thing about Rome 2: accessibility. Much like other Total War games, Rome 2 is very easy to get into, even if you are unfamiliar with the RTS genre. It’s easy to select and direct troops and the intro cinematic does a pretty good job of telling you what you should do without holding your hand too much. So if you are unfamiliar with RTS games but want to find out what this “Total War” thing is all about, Rome 2 looks to be a good a jumping on point as any. Just make sure your PC can handle it, as Rome 2 is no slouch in the graphical department.