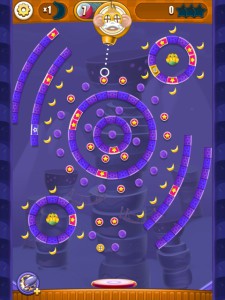 This game was first described to me as “Super Monkey Ball meets Peggle”, Peggle being a game I’ve never played. For anyone who’s in my boat, I’ll explain the basics: essentially, you launch a ball into a 2D course, try to bounce it off of various objects in the environment and hit specific targets marked with stars. There are bumpers and curved surfaces to bounce and roll the ball off of, as well as special “power up” blocks, which I will discuss later. This game is all about using physics and objects in the environment to hit all the targets before you run out of balls. It’s a fairly simple concept, but I must admit it was a fun diversion. The physics felt great and maybe even a little forgiving, which really helped make for a fun little physics game. 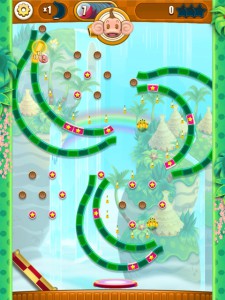 You have a variety of different Monkeys to choose from and for the most part they didn’t seem that different during regular play. Ai Ai is good for beginners, since he has an aim assist that tells you where the first bounce will take you. For the other characters, the big difference comes when you hit he aforementioned power up blocks. When powered up, Baby’s ball shrinks and gains superb bouncing ability, Gon Gon’s ball gains the ability to smash through objects in the environment, Yan Yan gains the ability to fire two balls at once, and so on. These power ups add some nice variety and spice to what might have otherwise been a stale game.

Super Monkey Ball Bounce was my least favorite of the three games on display, but given that they were all pretty solid games that’s not saying much. Though simplistic in both its game play and visuals, it was entertaining. I will definitely be downloading it when it’s released in August, provided it only costs a few dollars.