The Tokyo Game Show 2015 reveals keep coming as we now have the an official title for the once secret game from Vanillaware and published by Atlus titled Thirteen Mecha Soldier Defense Zone. 13 Sentinels: Aegis Rim, the official title, is an upcoming giant mech game due out for PS4 & Vita. As evidenced by the trailer and screenshots, the game features 3D environments and mechs and 2D hand drawn characters. The result is lovely, as the game looks like a drawing come to life. The game is currently only announced for Japan, but we would not be surprised if it made its way West.

After the break, check out screens from the game and stay tuned to SEGAbits for more information on 13 Sentinels: Aegis Rim as we hear it! 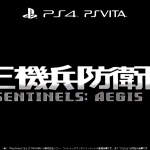