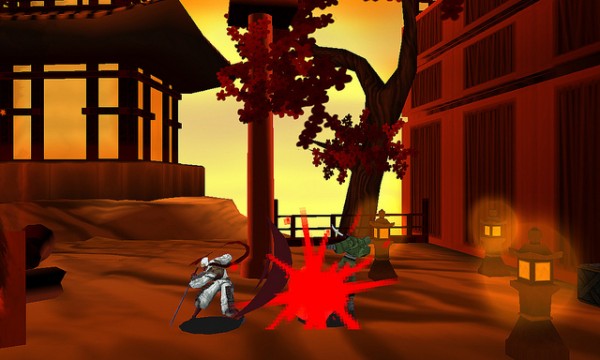 Shinobi 3DS focuses on Joe Musashi’s father, Jiro Musashi, and it starts out with a mysterious army of ninjas attacking and torching his village. Throughout the first level, Jiro goes through his burning village, riding on horseback through a forest, and eventually making it into the mountains, where he fights the level’s boss, a strange ice themed witch. 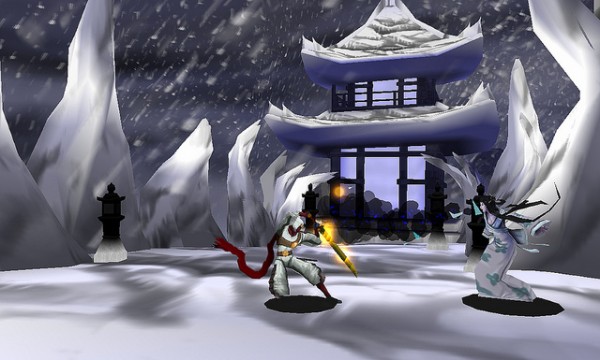 One immediate worry I had was whether or not the game would play like a Shinobi game. The original Shinobi had a neat one button attack system, which allowed the player to both throw shuriken and wield Musashi’s katana on the same button. It also had things like the ability to fire a spread of shuriken, hone in on enemies with a kick, double jump, and climb on the ceiling. My time with Shinobi 3DS thankfully put my worries to rest, because most of this is here, and what isn’t has been replaced by something better.

First, let’s talk about the battle system. The one button battle system is gone, as Shinobi 3DS opts instead for 3-button combat. The katana has been given its own button, and Musashi can now use a grappling hook, which allows you to grab enemies who are above you. Now I’ll admit that I miss being able to combo enemies with the shuriken and the katana by just pressing one button, but its absence isn’t really missed much. I can now more decisively choose when I want to perform a sword attack or a shuriken attack, and it allows me to approach enemies a bit more effectively. It also forces me to not button mash when I approach enemies who are immune to either the katana or the shuriken. Much like past Shinobi games, Shinobi 3DS does feel like a shooter. You get unlimited shuriken, and while your supply needs to recharge after around seven shuriken, it recharges very quickly. A few moves from Shinobi 3 make their return, including the homing kick and the ability to fire a spread of shuriken after a double jump. In addition to these, Musashi can do a sword spinning attack during a double jump for up close aerial attacks and you can perform a slide to close the distance with enemies firing shuriken at you. The game has increased hack ‘n slash elements, too. You can pull off several different moves with the katana, giving you a larger range of melee moves than what you had in Shinobi 3. Combined, all these various forms of attack make it very possible to pull off a variety of different combos and dispatch of enemies in a variety of different ways. Taking a page out of Shinobi PS2, it is possible to do a load of mid-air attacks, and jump off of one enemy to another. By and large, the combat is a lot of fun, and isn’t so far removed from the Shinobi formula of old that it becomes unrecognizable. 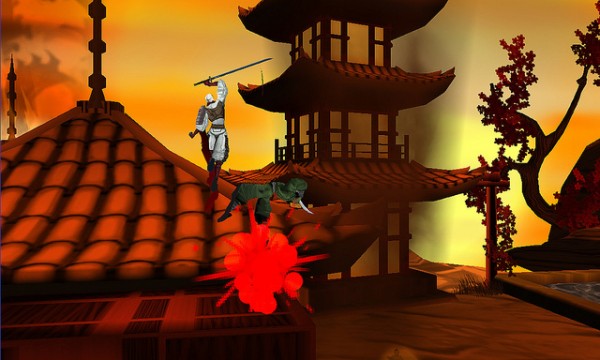 The level design and overall difficulty are also comfortably similar to Shinobi 3, without being a retread of past locations like Sonic 4 was. You can hang on to the ceiling, jump from wall to wall, and pass through certain ceilings and floors, just like you can in Shinobi 3. The wall jumping and double jumping even control similarly to how they did in Shinobi 3, right down to the timing required to pull them off. You can’t just button mash the jump button to make Musashi double jump here.

The difficulty also has not been dumbed down for today’s gaming audience, let alone the audience usually associated with Nintendo’s platforms. This game is hard from the outset, but not so much so that it becomes overly frustrating. There’s a few tough bits of platforming, as well as a variety of enemies that require different methods to bring down. There are two instances late in the level that require very precise timing in how you jump. The first instance takes place on a wooden platform filled with spikes, where you need to time your wall jumps to throw yourself over the spikes. I failed horribly at this, and it was the source of one of my many deaths throughout my time with the game. Another area in the mountains has a pad of spikes on the ceiling in a place where you need to climb across the ceiling to get to the other side. You need to perfectly time a double jump while also making sure you have enough height to get to the ceiling after you get past the spikes.

The enemies can also be incredibly difficult to take down. They are all very aggressive, and some are totally immune to your shuriken, requiring you to get in close to defeat them. One particularly bothersome enemy has actually returned from Shinobi 3. Anyone remember those annoying samurai who blocked your way and fired blasts of energy at you? They’re back, and even more difficult than before. Just like before, hitting them with a shuriken will stun them. Unlike before, you don’t have any ledges to take you out of harms way. Your opening with which to stun them with your shuriken is also a lot smaller, requiring more precise timing and multiple attacks. You’ll need to stun them more than once this time around. 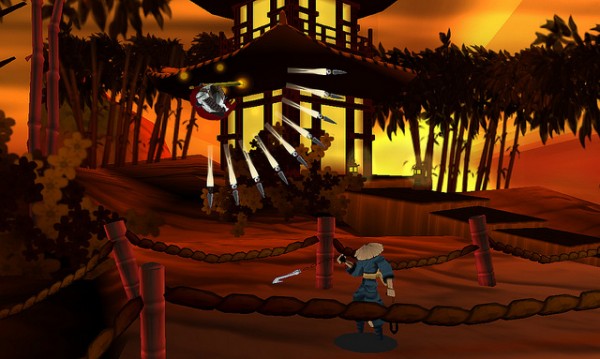 Graphically, the game is definitely stylized, and it doesn’t use a cel shading filter. On the big screen on display it looked kind of…ugly. Shinobi 3DS definitely doesn’t use the 3DS’ full power, however this is made up for somewhat by the stylized look of the game. It still looks nice in motion, despite how low poly the enemies can be. By and large, I wouldn’t give this area very high marks, but it’s not a total graphical disaster either. Low poly count, but smooth and stylized.

Overall, Shinobi 3DS turned out to be a welcome surprise. Gryptonite has done an excellent job with this new entry, and it’s one that I believe will please many fans of the original games, particularly those who loved Shinobi 3. Its difficulty has not been dumbed down, and the game has more than enough references and similarities to feel like a continuation of the series, not a reboot or re-imagining. While the graphics are kind of ugly, the do have a nice stylized look that shines through. As a fan of the series, I was really happy to see this.

Expect a full review when the game comes out this fall.