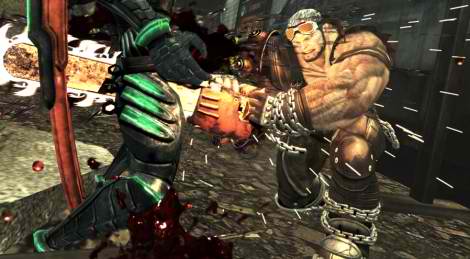 The demo consisted of an online fighting game that plays similarly to an unltraviolent version of Power Stone but from a third-person perspective. You can play as several characters from the Madworld game such as Jack or the “muthafuggin” Black Baron or several new customers. I played as Big Bull, agiant cyborg Bull with a Jetpack that’s also a giant hammer. The goal was to rack up the most points by laying waste to your enemies in effective and different ways. I focused on one opponent at a time and used a combination of weak and strong attacks. You can also press R1/R2 to defend yourself while you look for an opponents’ opening. The camera is not that good for this type of combat; I was always losing where my opponent was and would get attacked from behind. My favorite move was holding L2 to bring out my hammer and lay waste to many opponents at once. This move did leave me vulnerable. There’s probably a button to focus on one opponent, but I couldn’t find it.

Anarchy Reigns is due out February 2012. I still have faith that the final product will live up to expectations, but the MP at E3 left me a little flat.

One response to “E3: Anarchy Reigns hands on”