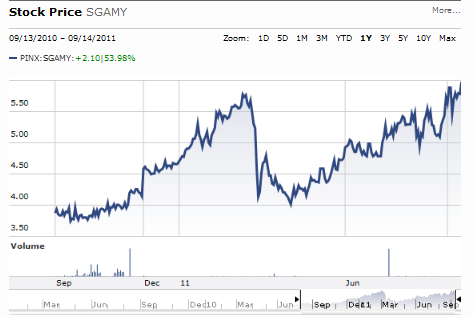 Since last year, SEGA’s stock has been on a tear, hitting a new 52 week high seemingly every month. Only the tsunami and subsequent earth quake that rocked Japan was able to slow it down. Well, now it seems that SEGA stock has fully recovered from March’s disaster, as the company reaches a milestone it nearly reached earlier in the year: a $5.99 share price. SEGA is no longer a penny stock, a designation they’ve had since their stock price began to crumble in 2007.

In the past, these surges have been caused by a positive quarterly forecast for SEGA’s earnings. SEGA’s stock price in 2010 was primarily driven by the company constantly beating it’s own expectations several quarters in a row. This summer surge however, happened in spite of SEGA posting a quarterly loss due to weak game sales. In fact, there is no one major financial event that has happened that could possibly lead to this surge. This would seem to indicate that investor confidence with SEGA has continued to soar even despite some recent financial problems.

SEGA’s next quarter report should be coming out within the next month. We’ll be sure to bring it to you!

One response to “SEGA Stock Closes at Three Year High”