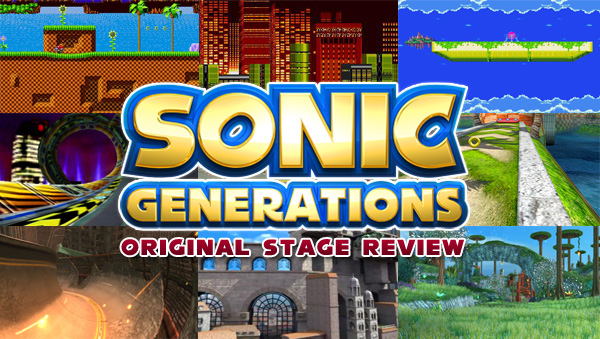 Some fans have bemoaned the inclusion of Green Hill, due to the fact that the stage has reappeared more times than any other Sonic stage. We saw it in the 8-bit version of Sonic 1, Sonic Drift, Sonic Adventure 2, SEGA Superstars Tennis and Super Smash Bros. Brawl to just name a few. But there is a reason for Green Hill’s inclusion: it’s the first ever Sonic stage and a franchise defining location. Sure, a part of me would love to see Marble Zone getting some recognition (dang 3DS version should have included it) but I can’t complain about Green Hill Zone. The stage is pure Sonic and deserves to be the opening stage in a game celebrating 20 years of Sonic.

I was surprised when Chemical Plant was announced to represent Sonic 2. Given the heaps of love given to Casino Night over the years, by way of constant reappearances of the stage and stages like it (Casino Street, Bingo Highway), I was sure we’d see a Casino Night in HD Generations. Thankfully, Casino Night was shifted to the 3DS and Chemical Plant was given the spotlight. While Emerald Hill was a fitting introduction to Sonic 2, Chemical Plant was the point where players really got to experience the increased speed of Sonic 2. Revving up a spin dash lead to insane roller coaster-like moments, while the large variety of new gimmicks revealed that there were more new experiences to come. Because of those elements, and the kick-ass music, Chemical Plant gets my seal of approval and I’m certain the approval of many other Sonic fans.

While I wanted to avoid talking about the gameplay of Generations in this article, I can’t avoid talking about it when mentioning Sky Sanctuary. Initially I was unexcited by the news of the selection of the stage. But as I saw more footage I realized that Sky Sanctuary was finally being given the classic act it deserves. The design and music of the original were fantastic, but it was far too brief. Acting as more of a transitional boss area than a full-on stage, Generations have taken the best bits of Sky Sanctuary, dropped the boss moments and made it what looks to be a great stage. Many other Sonic 3 & Knuckles zones would have been good alternatives, but Sky Sanctuary acts as the ultimate Sonic 3 & Knuckles representation by including both Angel Island and the Death Egg as background elements. The Egg Robos are also bad-ass badniks who needed more screen time.

The selection of Speed Highway was not surprising. At the time of Sonic Adventure’s release, the two stages shown again and again were Emerald Coast and Speed Highway. The images of the killer whale chase and the twisting highway seen above are burned into my brain thanks to SEGA featuring them every time the game was shown on TV and in print. With Green Hill’s inclusion, it would be a poor choice to highlight yet another day time tropical paradise, so Speed Highway was a shoo-in. The original stage was a lot of fun, kicking off with a high-speed run through a city at night and concluding with a race down the inside of a building which brought the player to the ground taking place at dawn. While the first area of the stage is 100% confirmed for Generations, we’ve yet to see any sign of At Dawn. Fingers crossed that the area appears somehow, just so we can hear that tune that strangely sounds like “I Will Survive”.

City Escape is no doubt a stage that defined Sonic Adventure 2, but the selection of the stage has me split. On one hand, its a quality stage that defines the second Adventure game, but on the other hand it just feels too expected. Of course, any first stage of a Sonic game comes to being a game defining stage. But at the same time, would it have killed Sonic Team to mix things up and delve deeper into SA2’s playlist to feature a stage like Pyramid Cave? Pyramid Cave also came to define SA2 during the Dreamcast years, appearing in a number of early screens, and bringing back the Sonic stage cliche of an Egypt-like desert. The music for Pyramid Cave was beyond awesome and I can only imagine the possibilities a classic version of the stage. Perhaps some Sandopolis gimmicks?

Seaside Hill is the third stage in Generations to be the first stage of its original game. However, unlike City Escape, it’s a great choice for a game defining stage. Egg Fleet would have been a nice second choice, but it’s possible Sonic Team wanted to stay away from stages that felt like the epic end of a game. Fans seemed to also want Grand Metropolis, but possibly the similarity to Chemical Plant was too much. The original Seaside Hill was very much a 3D Green Hill with more water and ruins. It wasn’t until the second act of Sonic Heroes that the stage became its own with Ocean Palace. Despite going with the Seaside Hill name, Generations appears to have amped up the palace feel of the stage, stripping it of much of the Green Hill look. The stage appears closer to the water, like the original stage, and there is an abundance of gimmicks by way of cannons, turtle-shaped islands and a go-kart. Sonic Adventure fans even get their killer whale inclusion (and then some). Overall a great, but expected, choice for a Heroes stage. Had Generations leaned towards the checkered hills dominating the stage, it would be a poor choice, but what we’re getting looks excellent.

Uh-oh, it’s the dreaded ’06 stage! Fans knew we’d see something from Sonic ’06, but what was anybody’s guess. Given the poor quality of the game, it was difficult to decide what constituted a “good” Sonic ’06 stage. The prime candidates were Kindgom Valley and Crisis City. Both were shown off quite a bit early in the game’s development and came to define what ’06 would be. The stages themselves are broken, theres no denying that, but they are also the most playable of the stages in the game. Given the importance of Crisis City from a story standpoint, and the fact that it would only be possible to revisit the stage by way of time travel, it’s a good choice for a Sonic ’06 stage. The best thing I can say about the original stage is that it will finally be redeemed and made playable in Generations.

Also known as Orange Roof in Japan (a nod to Green Hill?), Rooftop Run takes place in the city of Spagonia, an important location in Sonic Unleashed. The stage itself was one of the best to appear in the 2008 game, thanks to a lack of death pits and live-or-die QTEs. The original, and the Generations version, feature awesome set pieces including running on the face of a clock, and taking a vertical dive down the side of a clock tower. I can’t say much more than that Rooftop Run is a fitting Unleashed stage that seems to be even better in Generations, thanks to control tweaks and the addition of a world festival going on as Sonic races through the town. My hope is that the nighttime version of the stage returns via a mission, sans the werehog of course.

The latest game to be referenced in Generations is 2010’s Sonic Colors. I’m actually very surprised that Sonic Team were able to choose what is now a fan favorite stage at such short notice. Unless development of Planet Wisp didn’t occur until after the release of Colors, allowing the development team to learn what the fan favorite stages were, Sonic Team very well could have gone with their gut and remade the stage knowing it was one of Colors best. I recall fans citing the stage as a reason an HD version of Colors was needed, and now those fans (sort of) get what they wanted. The strongest aspects of the original stage were the design and music, in my opinion. The idea of a mine set on an alien planet is unique to the Sonic series, and in fact seems very much like something found in Phantasy Star Online (specifically Mines 2). Of all the Generations stages, this one has been given the least show, and as such is the one I’m most looking forward to.

So that covers the stages found in Sonic Generations. Overall, a great line-up. Sonic Team could have thrown us some curve balls, by dropping City Escape and Seaside Hill for later stages from their respective games, but I’m not going to complain about what we’re getting. You can, however, complain to your hearts content in the comments below! Did Sonic Team do a good job in the stage line-up? Do you have favorite moments from the original stages? Sound off!

Opinion: So about Project Dream and their Dreamcast 2 plans – calm down, it’s not official or sane
Editorial PlayStation 3 Sonic Generations Xbox 360