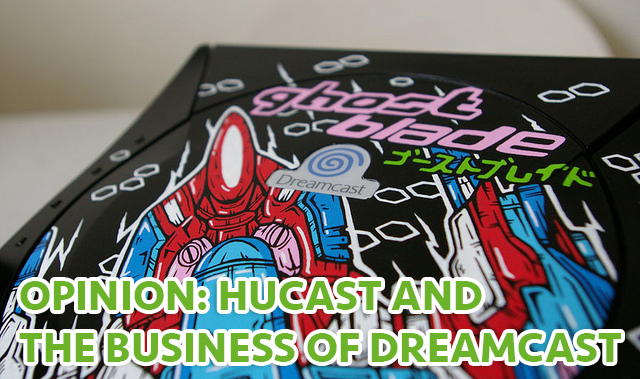 Early Dreamcast publishers like Goat Store, redspotgames and NG:Dev.Team saw the desire for new Dreamcast games and have set a high bar for game development and releasing. Their games, and each new commercial Dreamcast release that follows, are on professionally pressed discs with similarly professionally printed covers and manuals. Game soundtracks are professionally composed and released alongside their games. Most games support official Dreamcast accessories beyond the standard controller like the mouse, keyboard and arcade stick, or the VMU’s screen during gameplay, as well as aftermarket accessories like the Dreamcast SD card adapter and VGA devices. 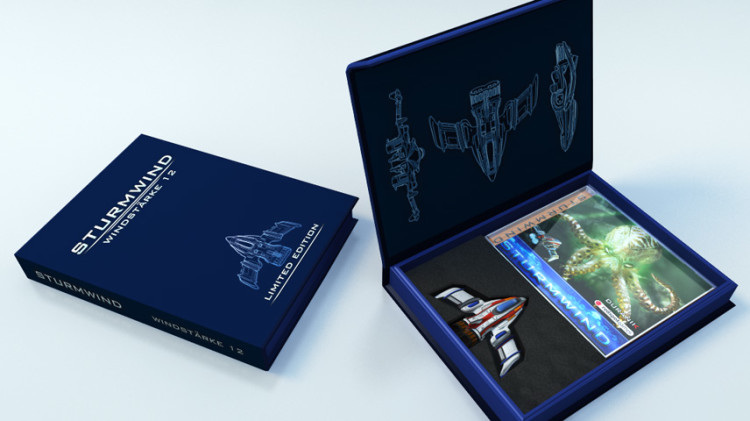 The word “professionally” is not used here lightly. Thanks to the aforementioned publishers, the Dreamcast community has come to expect professional work from professional releases, and that’s a good thing. But as quality is raised across the board in terms on the games themselves, so must the quality in how a company or developer conducts their business.

Game development and distribution can be complicated and issues arise. It happens to big companies on big consoles, it happens to small companies on small platforms, and it’s happened to nearly every independent Dreamcast release. And while no one likes to hear about development problems or game delays, especially when the publisher already has collected Kickstarter or pre-order funds, the Dreamcast community like the gaming community as a whole understands it’s a part of the process and tries to remain patient. But when an issue does arise it’s the responsibility of the developer or publisher to communicate that issue to customers and fans.

That’s when nostalgia for the Dreamcast only goes so far and the need to recognize that Dreamcast game development is once again a full-fledged business becomes apparent. And there’s no bigger player in the business of Dreamcast than developer and publisher Hucast Games.

Hucast is owned and operated by René Hellwig who, along with his brother Timm Hellwig at NG:Dev Team, developed ‘Last Hope,’ one of the first critically and commercially successful independent Dreamcast games. While the next few NG:Dev Team games would also release on Dreamcast, René Hellwig left the team after ‘Last Hope’ to focus solely on the Dreamcast and founded Hucast. 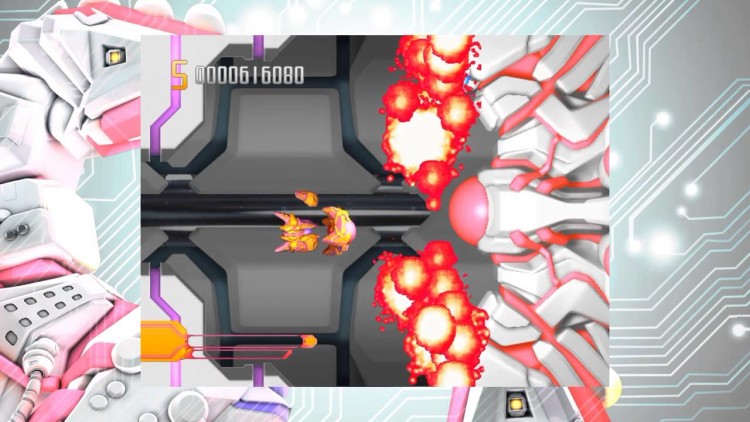 Hucast’s first release was the Dreamcast exclusive shooter ‘Dux’ in 2009. Homage of sorts to ‘R-Type,’ the game flew under the radar at launch and was mostly well received despite having a  that negated the saving of high scores.

It wasn’t until Hucast’s very successful 2012 Kickstarter campaign for ‘Redux: Dark Matters’ that the developer really started to gain recognition not just in the Dreamcast community, but in the gaming community worldwide.

Redux: Dark Matters was billed as a new shump for Dreamcast. Among the tiers was a Kickstarter exclusive steelcase edition that included an updated version of the original ‘Dux,’ appropriately named ‘Dux 1.5,’ with release scheduled for December 2012. At the time of its announcement, Hucast made clear that the only way to obtain ‘Dux 1.5’ was through the Kickstarter exclusive steelcase edition or limited edition of ‘Redux: Dark Matter.’ 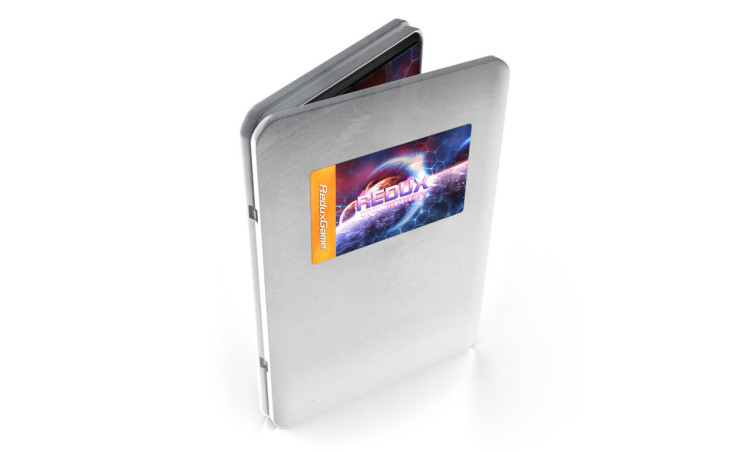 December 2012 came and went, and while Hucast did provide the occasional Kickstarter update, the reasons for delay were resigned to vague heavy kickbacks explanations during development. Then the Kickstarter exclusive steelcase edition became available for purchase at Hucast’s online store. That was followed by a full retail release of ‘Dux 1.5’ in April 2013. The much hyped Kickstarter exclusive, which helped drive pledges, was now available for anyone to purchase almost a year before Kickstarter backers of ‘Redux’ received their games. This angered many Kickstarter backers, but the biggest controversy surrounding ‘Redux’ was yet to come.

A few months before ‘Redux: Dark Matters’ was to release on one of its announced release dates of December 3, 2013, Hellwig finally clarified that ‘Redux: Dark Matters’ was in fact a remake of ‘Dux.’ That effectively made ‘Redux’ the second remake of ‘Dux’ after ‘Dux 1.5.’ While ‘Redux’s’ Kickstarter page did not explicitly state the game was a remake, it did specifically state it was a new shump thus pushing perception that it was a sequel rather than a remake.

From The Gagaman’s “First Impressions: ‘Redux: Dark Matters’ for the SEGA Dreamcast” article: “Above is just a small example of the resolution difference between Dux 1.5 and Redux, which is on the right. I can only get photos of still shots from the game and my capture equipment doesn’t really do the Dreamcast justice.”

Once Kickstarter backers began to receive their copies of ‘Redux’ they noticed there was one more thing Hellwig never clarified throughout the development process and Kickstarter campaign: the game graphically did not look the same as all the media shown up to the point of release. The game was fuzzy and jaggy, and not ‘HD’ quality. Through their Facebook page, Hucast explained that they had made a mistake “confusing the Dreamcast and HD builds” of the game. They also retroactively added a disclaimer to ‘Redux’ trailers stating the footage was captured on PC, but those videos have since been removed from YouTube. To make matters worse, if the first boss was encountered in the wrong way ‘Redux’ would freeze and a hard reset of the Dreamcast would be needed. 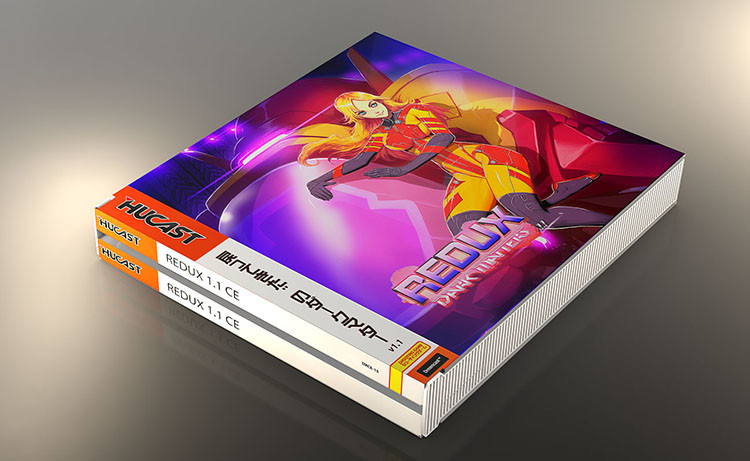 Much like the original ‘Dux,’ Hucast offered an updated version of ‘Redux’ dubbed ‘Redux 1.1.’ For a short period replacement discs were offered to owners of the original ‘Redux,’ but Hucast required additional payment to cover shipping. ‘Redux 1.1’ would also go on to be offered in multiple editions for purchase at full price, just like every variation of ‘Dux’ before it.

While Kickstarter backers of ‘Redux: Dark Matters’ continued to wait for their game due to delay after delay, Hucast began to take pre-orders of their next, in-house developed Dreamcast game ‘The Ghost Blade.’ The limited to 300 copies Supporters Edition went up for preorder on Hucast’s online game store in January 2013 with an early-bird price of 79€. It featured an ‘exclusive’ start screen, ‘exclusive’ packaging, an ‘exclusive’ artbook, preorderer’s name in the credits, the official soundtrack, a beta demo disc ahead of release, and a SuperPlay DVD. Despite ‘Redux’ still unreleased at that time, ‘The Ghost Blade’ was scheduled to ship by the end of 2013. 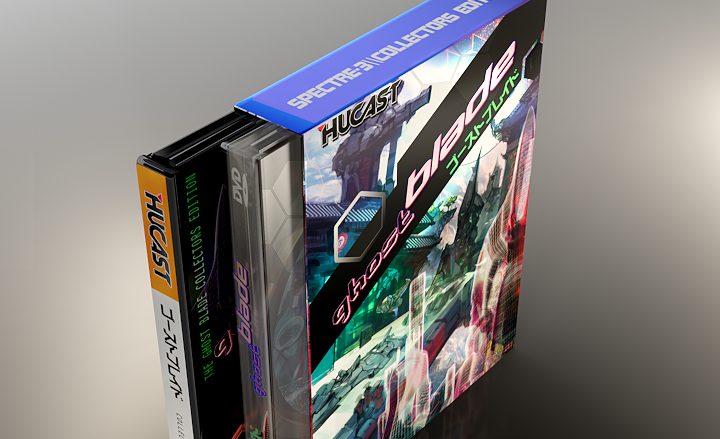 2013 came and went without the release of ‘Redux: Dark Matters’ or ‘Ghost Blade,’ and despite ‘Redux’s’ eventual release in January 2014, the entirety of 2014 was a quiet year for ‘Ghost Blade.’ But Hucast was keeping busy.

In January 2015 Hucast announced they would publish and release a port of Orion’s mobile platformer ‘Alice’s Mom’s Rescue,’ with both regular and limited editions, on Dreamcast the following month. April 2015 saw the much awaited news that ‘Ghost Blade’ would release in September 2015 with two-player co-op in Stage Mode and Caravan Mode.

About once a month Hucast would post on their official WordPress site and Facebook page reminders that ‘Ghost Blade’ was coming out in September. Hellwig in particular was active promoting the game’s release through media and interviews, but never specifically mentioned ‘Ghost Blade’s’ actual development. In addition, the ‘Ghost Blade’ beta demo disc included with the purchase of the supporter/collector’s edition never materialized.

‘Ghost Blade’s’ release came as promised the week of September 21, 2015 much to the delight of Dreamcast fans worldwide. Gamers were eager to get their hands on the visually impressive Dreamcast exclusive. Order shipping confirmation had never been a consistent feature of Hucast’s online store, so customers were forced to email or Facebook message Hucast regarding confirmation of their orders.

It was at this time Hellwig revealed via Facebook that only the regular edition and limited edition of ‘Ghost Blade’ were shipping. The supporter/collector’s edition was delayed until (at least) November 2015, because the person who was to record the SuperPlay DVD could not record it yet. This effectively meant that the first people to pre-order ‘Ghost Blade’ would be the last to receive their pre-orders. 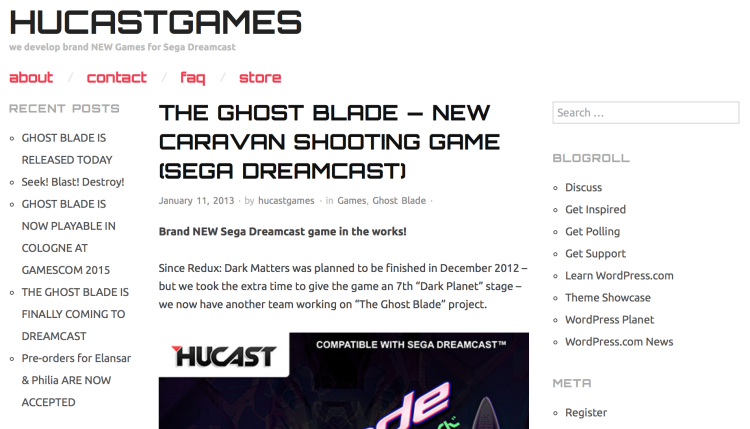 But as with the ‘Redux: Dark Matters,’ the release of ‘Ghost Blade’ gets worse. Those customers that had received their copies in a timely manner after release were at a loss when searching the game for one of its most touted features: Caravan Mode.

Queries, again through Hucast’s Facebook page, prompted Hellwig to admit that Caravan Mode was not included in the final game and that it had been “abandoned” at some point during development. However no announcement of Caravan Mode being dropped was ever made prior to the September 24th Facebook post admission. This left consumers with literally half the game they had paid for.

Hucast was quick to remove mention of Caravan Mode from ‘Ghost Blade’s official description on its online store, but the game’s description has gone unchanged on Hucast’s retail partner Play-Asia as well as it being listed in past Hucast’s announcements. 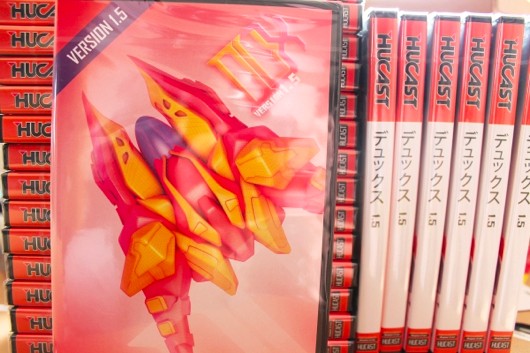 Customers and fans of Hucast have unfortunately become accustomed to poor customer service, apathetic responses by René Hellwig, shady moves in making otherwise exclusive content available to all, and even Hucast preying on Dreamcast’s fans’ nostalgia with re-releases and multiple editions to garner business.

But just because a game isn’t officially licensed by SEGA for their system, does not mean publishers and developers should not be held to industry and business standards. After all, independent Dreamcast games are professionally made and marketed, and these are proper companies releasing a commercial product.

Because when a consumer purchases a product from a company, both parties are entered into a business contract. The consumer agrees to the price asked for by the company by making payment, and the company provides said product as described.

Hucast is a proper company commercially releasing professionally made games, and taking and managing orders for a product they agreed to provide as described. So the confirmation by Hucast of the lack of Caravan Mode in ‘Ghost Blade’ AFTER the game was already in consumers’ hands isn’t just another case of poor communication or questionable business practices.

Since the revelations that the supporter/collector’s edition of ‘Ghost Blade’ won’t release until November and the exclusion of Caravan Mode in the final product, Hucast’s online store has gone down for “maintenance.” In its place is a message that simply reads, “hucast.com will be back online at 3rd January 2016.”

As of this writing, the last Hucast or ‘Ghost Blade’ related post on Hucast’s Facebook page is from September 29. Hellwig’s last post on Facebook was September 30th, responding to a query about Hucast’s online store being down by reiterating it will “re-open on 3rd January 2016.” Outside of contacting Hellwig directly, there is no way to check the status of current orders including the yet-to-be-released ‘Ghost Blade’ Supporter/Collector’s Edition, and no way to check or cancel pre-orders of the previously announced ‘Redux 2.’ 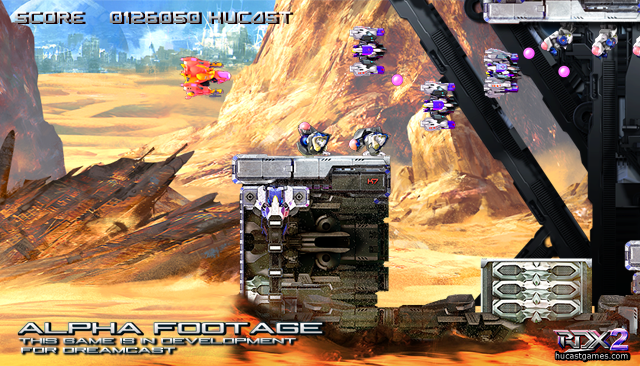 Today’s Dreamcast developers and publishers are small operations, and no one is saying they should have a full time public relations and/or marketing department. But we live in a time where 140 characters or less is considered an official statement. Facebook posts are used for press releases. It’s not unreasonable for consumers to expect a little communication or minor update every once in a while, especially when a game goes passed its original release date and the publisher has their money.

Hucast, like all companies, has a responsibility to maintain a line of communication and do right by their customers, and they should be held to this responsibility. 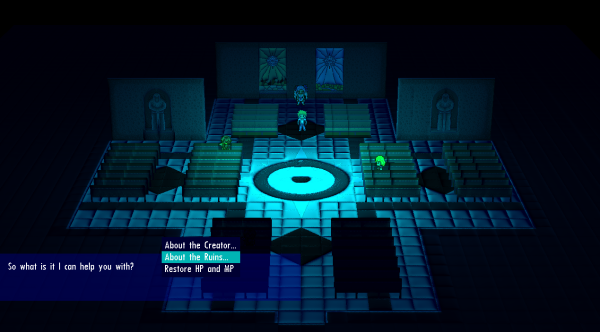 But it’s not a question of nostalgia or being a labor of love, because Dreamcast game development is still a business, and as such, should be appropriately treated as one.

24 responses to “Opinion: Hucast and the Business of Dreamcast”