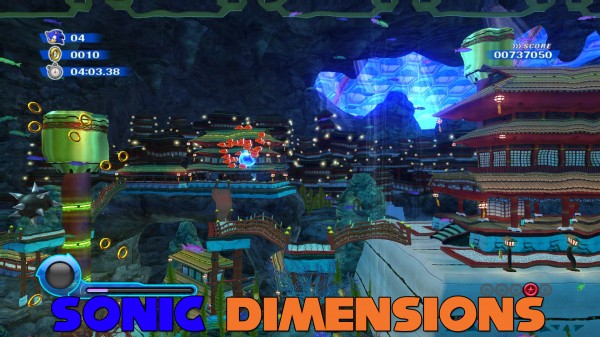 So, a rumor for a new Sonic game? Not surprising, but this rumor comes with a bunch of details that seem very possible, actually I’d be shocked if this isn’t mostly correct. The title, Sonic Dimensions, is a working title, so that will most likely change.

The game is supposed to take place after Sonic Generations and be the ‘spiritual successor’ to Sonic Colors. Sonic Dimensions is said to take advantage of some Wii U’s specific capabilities, including using the touch screen to activate powers and destroy enemies. Hopefully we can turn this off and not use it. It’s also said to have 4 player multiplayer. The story will be another time-space continuum one. Oh boy.

The game will have Sonic change colors, with each color supposed to represent a new personality for Sonic. Blue Sonic, of course, will be the core Sonic and will be the uniting figure for all the other colors. Five colors are rumored:

The catch with the powers is that you are only allowed to use two powers in a stage. Thus you have to choose wisely, like don’t choose Orange. A White Sonic option will appear for users who have died too much on one stage. White Sonic will make the game easier for the user, but give you a low rank.

Part of the rumor is that SEGA may be working with Nintendo developers on this title, supposedly with level design. Let’s hope the team at Nintendo understands Sonic games and aren’t walking in here thinking it’s a Mario title. The staff includes most of the people who worked on Sonic Colors.

Rival battles are said to be back, seems the game will focus on split personalities for all of Sonic’s friends, since rival battles will have you fighting ‘dark versions’ of them. Eggman will also have a good split personality. Of course, 2D classic gameplay will make its return to the title.

Music Plant from Sonic Advance 2 is rumored to be resurrected in this project.

Rumor: Skies of Arcadia HD announcement on its way?