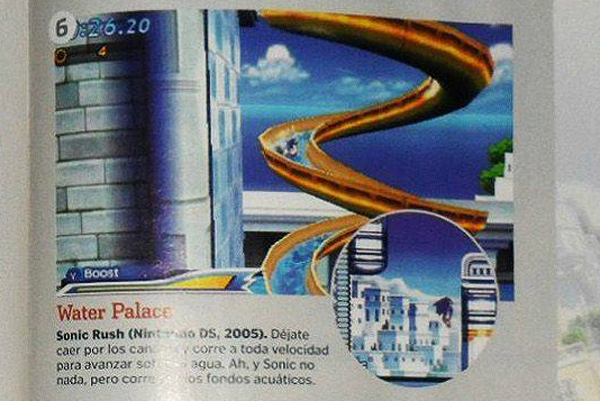 Turns out that the little peek we had at the final Sonic Generations 3DS stage was wrongfully interpreted, and not just by us. All over the web, SEGA fan sites thought Sonic Unleashed’s Apotos stage was going to be the modern era stage to join Sonic Colors in the haldheld version. However, a scan from the Spanish Official Nintendo Magazine says otherwise. As it turns out, a handheld game IS getting representation. The 2005 Sonic Rush DS stage Water Palace will be remixed in 3D, and surely we’ll also be hearing a remix of Hideki Naganuma’s awesome “Back 2 Back”. This is great news for fans bemoaning Sonic Team for featuring a first stage from a non-handheld title, as now we’re getting a second stage from a handheld title. It’s just a shame that the Game Gear and Advance titles did not get representation. Oh, by the way, the magazine seen above gave the game a 90%.