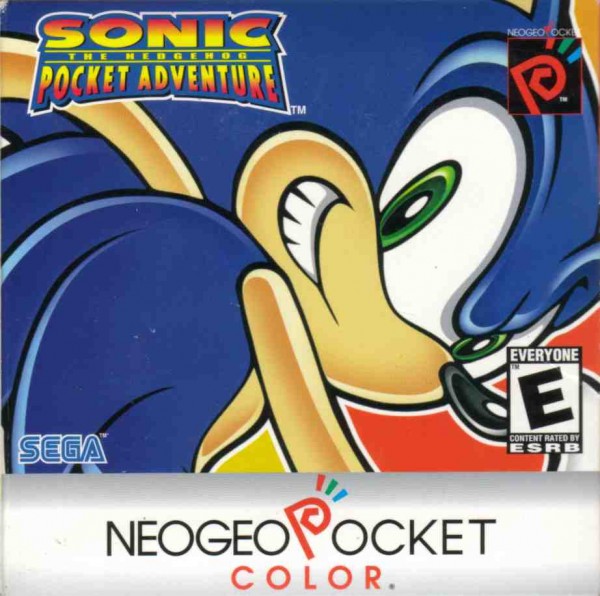 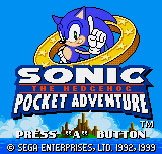 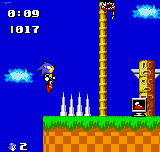 Sonic Pocket Adventure is a classic Sonic platformer. It utilizes the classic Sonic physics that we all know, love, and miss. If you’ve played any of the old Genesis titles you should know what to expect here: a physics based platformer that requires the player to use momentum and quick reflexes to get to the end of each stage.
The physics work well and feel right. You won’t ever find yourself standing on walls or walking up ceilings here. The controls are responsive, and the levels are largely well designed. This game was made before endless bottomless pits became the default method of making Sonic games hard, so the difficulty feels fair here. Like any side scrolling Sonic game, there are seven chaos emeralds to collect, and they are required to play the final boss and beat the game. 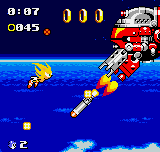 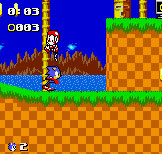 SPA holds the unique distinction of being the last “classic” Sonic title. In fact, the game’s content is actually an amalgamation of all three games from the original Sonic the Hedgehog trilogy. The locations of the first six zones were taken from Sonic 2, as are the half pipe special stages. The final zone was based around Scrap Brain from Sonic 1. The final two boss areas were taken from the Death Egg boss and Doomsday boss areas from Sonic & Knuckles. Finally, the music is all derived from Sonic 3. That being said, don’t take that to mean this is a port. SPA is in fact more like the upcoming Sonic Generations: its taken locations from previous games and has built all new levels in them. All of the bosses are also completely original, aside from Mecha Sonic. The music has also been redone, since the Neo Geo Pocket couldn’t handle Genesis music anyway. Finally, the game also has a set of puzzles that you can only complete from collecting pieces in game. This mode likely won’t attract anyone other than the hardcore completest, but it does offer players something else to strive for once they’ve beaten the game, especially since these pieces are not easy to find.
SPA plays like the Sonic game people have been demanding for decades. It’s got the right physics and it’s got the right level design. This is a classic Sonic game in every way, except for perhaps the title screen since that features green eyed Sonic. Of course great game play isn’t everything, especially not in a Sonic title. The visuals and audio also need to hold up.
Before I talk about how this game’s visuals measure up, I’m going to talk about the Neo Geo Pocket’s hardware for a bit. It was originally marketed as a “16-bit” color handheld. While it was certainly graphically superior to the 8 bit Game Boy Color, it couldn’t hold a candle to what we typically expect from a machine like the Genesis. This is the best looking Neo Geo Pocket game I’ve played thus far. The colors are bright and vibrant, the boss sprites are large and detailed, and Sonic himself is the best looking sprite I’ve played on the NGP. Most of the sprites have fairly limited colors and utilize a lot of white and black, but Sonic’s sprite is fully colored. The backgrounds look great, and the art style of the old games shine through pretty effectively here. 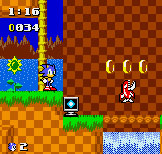 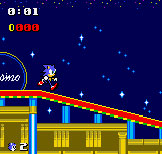 While SPA is one of the best looking games on the NGP, it also highlights some of the system’s limitations. For one, the levels here don’t look nearly as good as the original stages they were based on. There is less detail and everything looks blockier. There is also one vital problem that keeps SPA from being a triple A Sonic title: the frame rate. Frame rate issues are common in the NGP’s action games and unfortunately SPA was not an exception. The frame rate isn’t persistently poor, but rather pops up when there is a lot going on on-screen. The problem isn’t persistent enough to run the game, but it’s still far too noticeable to be ignored
The music selection is pretty solid, with tracks from Sonic 3, Sonic & Knuckles, and even a few from Sonic Jam. The first two have my favorite tracks out of all of the old school Sonic games, so SNK certainly picked good tracks to bring over. Of course, the NGP’s audio quality isn’t as good as the Genesis, so the tracks don’t back quite the same punch, but they are still a very good reason to keep the volume up. 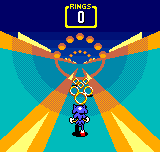 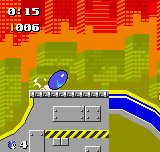 Sonic Pocket Adventure is the last hurrah of the retro Sonic era, before the character jumped headfirst into the art style and world we know today. As a send-off to this era it works pretty well, even if that probably wasn’t the intention at the time. It is an adventure I would highly recommend to any Sonic fan, and considering Neo Geo Pockets are pretty reasonably priced and have a great selection of still exclusive games to choose from beyond Sonic, I would highly recommend picking one up. While it does have a poor frame rate and retreads locations we’ve seen before, it also revisits the 16 bit era of Sonic in fashion that only a game from this era could do. Pick it up.
I would like to end this review with a fun fact: did you know several people who worked on this game would later go on to found Dimps, the creators of every handheld Sonic adventure since this one? Dimps was formed by several former SNK employees shortly after the company’s acquisition by Aruze. Dimps has since gone one to become the go-to developer for Sonic’s side scrolling handheld adventures, one of their latest efforts being a little game called Sonic Rush Adventure. How does that game measure up to their first effort? Find out in tomorrow’s review!