Welcome. Don’t let my sultry and mysterious voice startle you. For hundreds…nay, thousands….nay, nay, nay…..TENS of thousands of years, people have come to me in search of what they desire most. Few find what they are looking for…even fewer ever leave. Welcome to…the cave. That’s me, the cave. Yes, I’m a talking cave. Don’t laugh, it makes dating hell.

Thus begins the start of Ron Gilbert’s new adventure game “The Cave” from Double fine studios. An adventure game in the same vein of other 2-D adventure titles like Lost Vikings or one of Gilbert’s previous games, Maniac Mansion. Much like that game, it is full of character and dark humor. Not to mention some mind-bending but fun logic puzzles. Keep reading to get a little sample of what the game is all about and see if it’s to your “heart’s desire”. 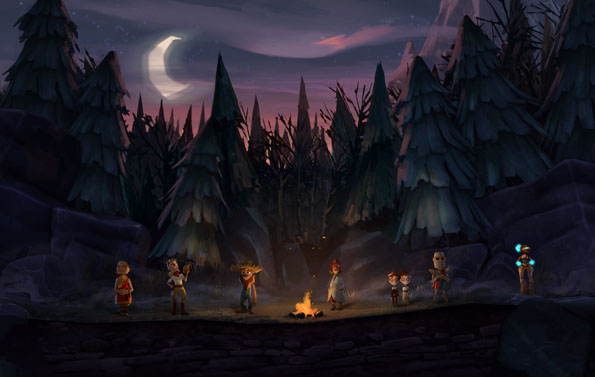 The game starts off with seven characters each seeking their own desires and wishes. A monk is seeking enlightenment and his lost master. An adventurer is seeking ancient treasures and some lost friends. A hillbilly is seeking true love. A scientist is looking to finish a scientific breakthrough. Two evil-looking twins are searching for their parents. A knight is looking for a sword of unequaled power and finally, a time traveler is looking to fix a wrong years in the making.

You get to choose three of these seven explorers for each playthrough of the game. Meaning you’ll want to play though the game more than once if you want to see each character’s overall story. Not to mention that several levels are themed to each of the characters so you won’t get to see all of the game unless you play it a few times over. That’s a pretty sneaky and clever way of extending the game’s length. 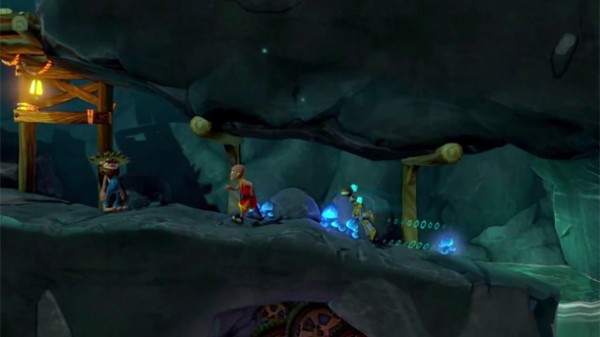 At a closed room at E3, Double Fine took us through some small portions of the game using three of the seven characters. The hillbilly, the knight and the scientist. All three you’ll be able to control separately or with friends in local co-op. The first puzzle area they took us through involved the hillbilly needing to open a gate to progress. As he pulls a lever, it only goes about halfway up meaning there’s another lever in needing of pulling elsewhere. The scientist has a lever near her, so she pulls it and the gate is fully open. However, it will just close again once they let go, so they need the knight to go past the open door and find a switch that will keep the gate open. This is just a small and simple example of some of the teamwork needed so solve puzzles both big and small. 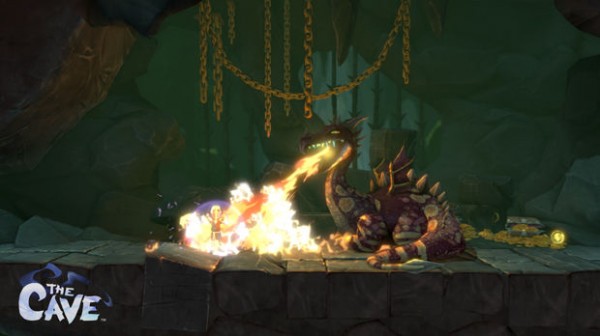 As I mentioned earlier, later levels are character themed based on their hearts desires which is how the cave tells their story. One such level involves the knight. There’s a giant, medieval castle deep in the cave with its own princess and a dragon deep in a locked dungeon. The princess is wearing an amulet that the knight desperately needs. He foolishly thinks if he gives her some gold that the dragon is guarding she’ll love him and give her the pendant. The cave wants him to get that gold so he gives the knight a guardian angel power that lets him float from high places and grants him a temporary invulnerability. (It should be noted that each character gets their own power from the cave. Helping give them even more individuality outside of their story.) So the knight goes down to the dragon’s dungeon which is full of gold. Oh, and a huge pile of dead knights. The knight tries to tip toe in, but the dragon spots him and immediately breathes fire down upon him. What to do? What to do?

Fortunately, the scientist is on the other side of the dungeon and she has a key to unlock the dungeon cell from a previous adventure. However, she can’t even tip toe behind the dragon to get some gold because he’ll just breathe fire upon her as well, so they need a distraction. Since the knight is invulnerable when using his guardian angel power, he merely steps in front of the dragon and is used as a distraction while the scientist grabs some gold and heads out of the dungeon. Unfortunately for the people living inside the castle, the scientist has forgotten to lock the dungeon gate behind her. As she climbs to the top of the castle we hear the screams of the guards and princess. “THE DRAGON IS LOOSE! WHAT IDIOT FORGOT TO LOCK THE DUNGEON?!! (Oopsie.) RUN FOR YOUR LIVES!” So the scientist reaches the top of the tower to the princess’s room to give her the gold…only to find the dragon happily munching on the princess with her legs dangling out of his mouth. He swallows the rest and spits out the pendant that the knight needed. Well, the knight may not have gotten the girl but hey, they got the pendant they needed and that’s the most important thing, right? Right? This is a great example of the kind of dark humor Ron Gilbert puts into his games. No “hamster in the microwave” mind you, but still very dark and funny. 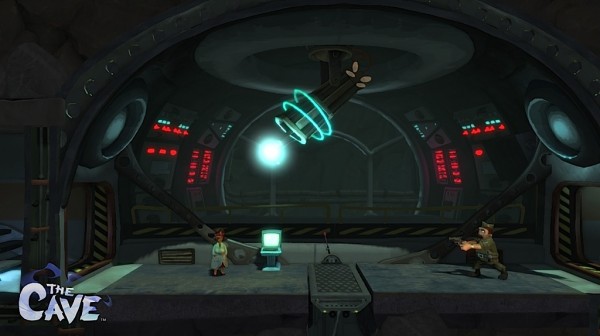 Both Sega and Double Fine seem to be finding some success in the smaller download market and with the combination of the two, it looks like it’s only going to grow even bigger. If going away from retail has only helped Double Fine find its place in the modern era of gaming, maybe the same can work for Sega. Only time will tell. In the meantime, it looks I’ll be enjoying original and fun games like Renegade Ops, Hell Yeah! and of course, The Cave.

The Cave will be available for download on X-Box LIVE, PSN and PC sometime in 2013.

2 responses to “E3 Preview: The Cave”