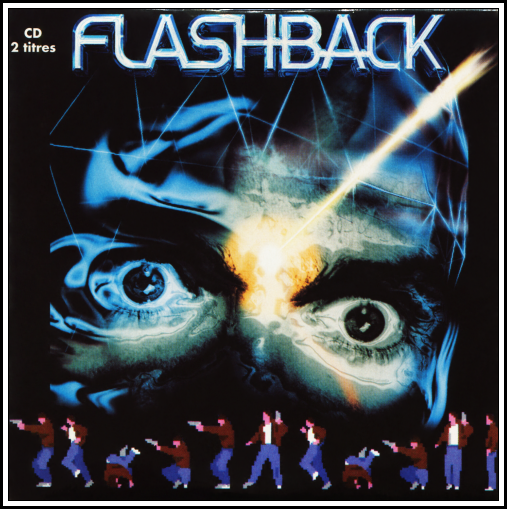 The score by Jean Baudlot and Fabrice Visserot has that power as well, I feel.

However, anyone who has played Flashback on Sega Genesis knows that it’s often a quiet experience. Yes, the music makes its presence known whenever there’s a cut-scene or enter a particularly dangerous area for the first time. Otherwise, you’re just soaking up the atmosphere. The jungle will breathe, ventilation fans will whir and sputter, accelerators….well, accelerate. It’s a remarkable world, but I wish Conrad – our protagonist – had a Walkman.

Well, look no further than Flashback for the Sega CD! Not only have existing tracks been enhanced with CD quality sound, but they’ve been remixed with the aid of Marc Minier and Patrick Sigwalt. The main title theme is more robust, featuring ambient sounds and a piano motif that adds a touch of human frailty to an otherwise forboding piece.

Listening to it now, there’s a striking simularity to Metal Gear Solid’s score that plays out over the main menu. The style is also reminiscent of French film composer Eric Serra and his scores for Luc Besson’s Nikita (1990) and Leon (1994). Serra is well known for providing avant-garde soundtracks with a unique mixture of artificial and classical elements. The track is so good that I used it for my short film, My Life with SEGA: The Next Level. I even made a CD copy for my tedious drives to work. It’s a great track that could easily accompany any film made yesterday, today or tomorrow.

In addition, new tracks exist for every level that play out during gameplay. Each track compliments the on-screen action and keeps you awake during those long treks through the jungle, or running packages back and forth, or ducking and rolling. It’s just badass and is most certainly welcome. This is truly a “cinematic platformer” now. Here’s a cut from the jungles of Titan.

In my research, I found that this score is exclusive to Sega CD. It didn’t make the transition to PC, 3DO, CD-i or Macintosh. The score makes owning this version absolutely essential to any self-proclaimed Sega fanatic. Even if you own and love the Genesis version, the Sega CD somehow managed the impossible; it improved on perfection. That….is a miracle.

Delphine Software, how I miss you. *hangs head low*