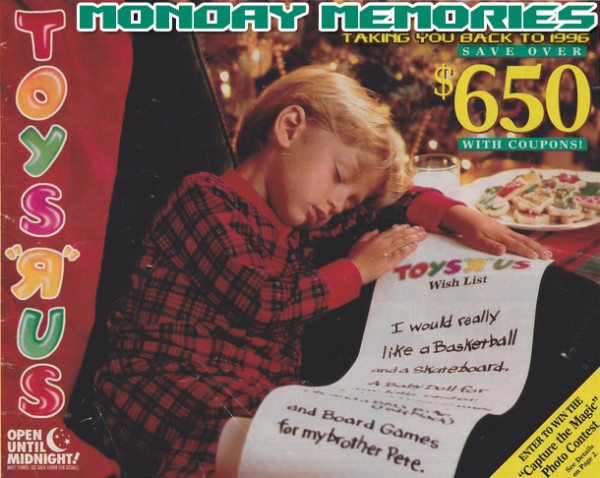 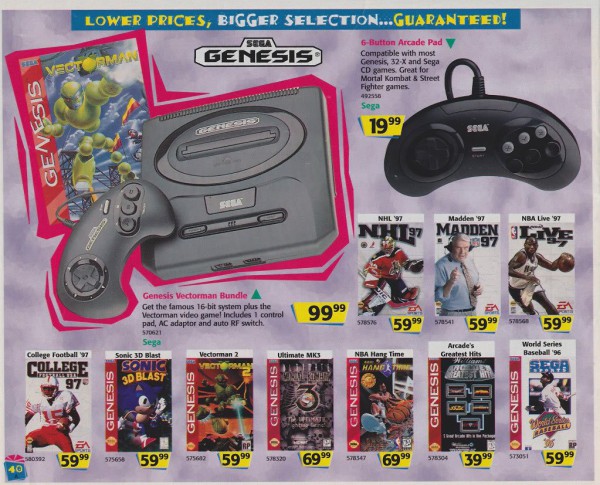 First lets start with the SEGA Genesis/Mega Drive which was still getting one whole page (plus) devoted to it, despite the fact that the SEGA Saturn had been out for over a year. I don’t think people appreciate how popular the little black box was with Americans, there is a reason people say that its SEGA’s crowning achievement (when it comes to popularity). Here we have the line-up they are selling us, as you can see the console is ending its life cycle with some new games. Sure they have some gold with Vectorman 2 and Ultimate Mortal Kombat 3 (if you want to spend 69.99 on that game), but mostly the games feel like the end of a consoles life cycle. Sport titles eat up most of the games. EA never changes.

The SEGA Genesis came out in America in 1989, so during this holiday season it would have been about 7 years old. That means the current console we can compare it to is the Playstation 3, which is also into its 7th year of life (it launched on November 11th, 2006). Here we have a Genesis bundled with Vectorman for $99 and if you where to buy a Playstation 3 bundled with Grand Theft Auto V it would cost you$269.99 MSRP.  Its hard to judge these bundles today since Vectorman at the time was about a year old. It is obvious that consoles used to cost less ‘back in the day’ compared to today. Even if we add inflation, the Genesis would cost you $149.05 today.

Now as for video games, yes they where a lot more expensive back in the good old days. I remember a ton of people complaining that they didn’t want to pay the new added $10 dollar price tag for Playstation 3 and Xbox 360 games because ‘games are just getting too expensive’ which is not correct. Games like Madden debuted for $59.99, like all games do now, but if we add inflation? You’d be paying $89.42 today for your early 16-bit graphical football adventures.

Don’t even get me started on more expensive games like Ultimate Mortal Kombat 3 (which was an updated version of Mortal Kombat 3) which would run you $104.33 today. 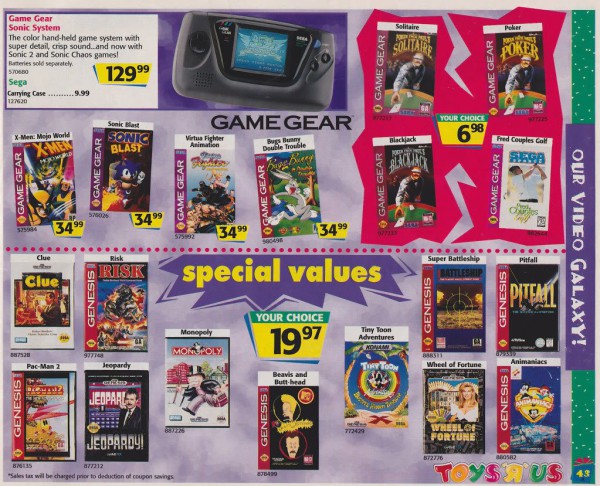 The games on the last picture for the SEGA Genesis where basically all new games, not every family could afford to buy their kids the latest and greatest. Don’t worry, SEGA had $19.97 dollar titles that added value. Want Pac-Man 2: The New Adventures (which was trying to be a platformer) and Tiny Toon Adventures? How about Animaniacs? You remember that cartoon, right? How much would one of these $19.97 budget titles run you today? $29.77 which seems to be on par with what is considered ‘budget’ today. We are talking brand new retail, it would be unfair to compare used game prices since used games weren’t as big as they are today.

This year would have also been the SEGA Game Gear’s last year of life (since the Genesis and Game Gear where both discontinued in 1997) and SEGA was trying to move units by offering two Sonic titles packed in for $129.99. Damn, what a deal. I’m already throwing money at the screen. How much would this console cost us today? $193.76. Considering that is about the price right now for a Playstation Vita, its easy to see that Nintendo and Sony’s handhelds are less expensive today than SEGA’s Game Gear. But do they give you that crisp clean sound?

Now we have my worse nightmare as a kid, those deeply discounted crap games like Blackjack? Poker? $6.98? How can a frugal parent resist! These are the equivelent to all those crappy Wii games you used to see for $15 dollars before you checked out at a store, only cheaper. Today these would cost you $10.40 and an unhappy child.

The other ‘premium’ Game Gear games go for $34.99, which would be $52.16 today. Yep, these handheld games where expensive, especially if you compare them to the original Game Boy games (which I uploaded those scans below for comparison!). 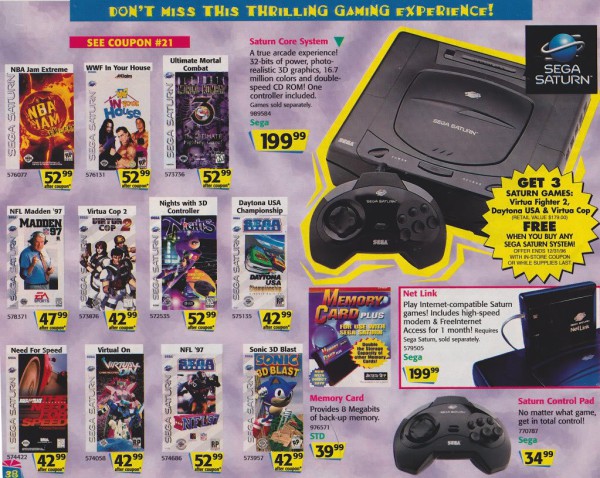 The SEGA Saturn was out for a bit over a year when this thrilling catalog hit mailboxes in America, the Saturn debuted with the price of $399.99, which you can see they cut by 50% (and included 3 free games). Honestly, SEGA at this point where desperate to compete against the Playstation and the newly Nintendo 64. Buying a Saturn on launch would have cost you today about $613.84 with inflation, considering that SEGA dropped the price in half a year later, its no wonder costumers where weary of trusting their brand. The Saturn’s $199.99 price tag today would come to about $298.11, so you would still be paying $600 dollars (over with taxes) if you want the Net Link adapter (which is pictured here with free internet access for a 1 month!).  Then you got the memory cards which cost $39.99 back in the day that provided an incredible 8 megabits! That would cost you $59.61 today, basically the price of a new game.

Do we even need to get into the game prices? Today you would be paying $64.08 – $78.99 per new game. Yes, the SEGA Saturn was a expensive investment. It is no wonder that most parents opted to force their kids to stick with their Genesis instead of upgrading them to a new unit.

Sadly that is all there is to see for SEGA in this catalog. Below are the other scans featuring mostly Nintendo and some Playstation stuff. Its a good way for you to compare what the competition had versus SEGA. I wanted to point out that this year Toy ‘R’ Us had ‘gold’ colored exclusives like a Gold Nintendo 64 and Tamagotchi pets. Remember those? 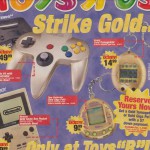 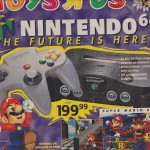 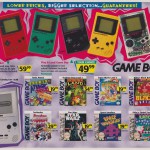 Game Boy is still around and cheap! 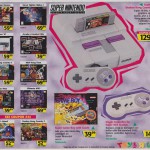 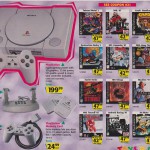 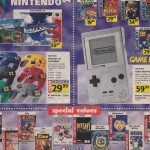 So what games would you want from this catalog? Tell us your dream list in the comments.

5 responses to “SEGA Memories: A look back at Toys ‘R’ Us’ 1996 holiday video game catalog”