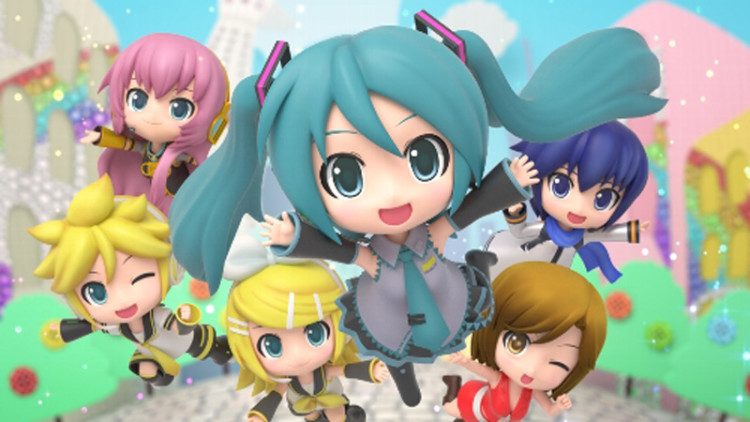 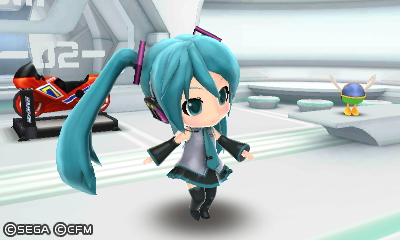 As evidenced in our SEGA developer retrospectives, pinning down which SEGA developer did what and which team they should be referred to as is a very complicated thing. Development teams change as staff come and go and internal restructures move resources around. So when I say that Sega AM2 developed Hatsune Miku: Project Mirai DX, I don’t mean that this is the exact same team that gave us Hang-On or even more recent titles like After Burner Climax, but it is very much a game developed by members of Sega AM2 and it certainly shows in the fanservice.

Hatsune Miku: Project Mirai DX is more than just a rhythm game, its a collection of mini games and virtual pet modes that almost act as an alternate home screen for your 3DS. There is just so much variety to the game that you will rarely find yourself exiting out of the title as there is a lot to play around with even when you are not in the mood for the core gameplay. One of these modes is a virtual room where you and your vocaloid can hang out and decorate with items using in-game currency. Think of it as Animal Crossing without all the chores and slaps on the wrist for abandoning the game for two months. While several of the items are Hatsune Miku related, there are some decorations of interest to SEGA fans. Seen above is perhaps the best item you can spend your in-game money on: a Hang-On arcade machine! While you can’t pull a Ryo Hazuki and play the actual game, Miku will occasionally hop on and play a game herself and you can hear the iconic Hang-On theme song. Other items include Opa Opa, Sonic the Hedgehog, and a Virtua Fighter 2 arcade machine. It’s stuff like these bits of SEGA fan service that really makes Hatsune Miku feel like less of a licensed franchise and more a part of modern SEGA. 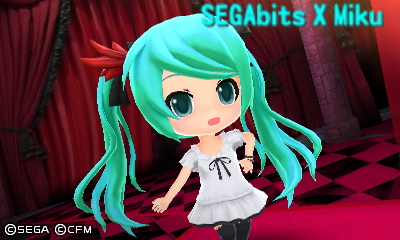 During the Dreamcast era, some of my favorite games included Samba de Amigo and Space Channel 5. Quirky rhythm games were a favorite of mine, and I was happy to see SEGA continue this tradition in 2012’s Rhythm Thief & the Emperor’s Treasure. Rhythm Thief remains a favorite of mine, but I found the game to be lacking in modes to keep gameplay fresh. Following completion of the game, there really wasn’t much more to do outside of replaying stages you’ve played before with little to no variation. Hatsune Miku: Project Mirai DX, meanwhile, offers up so much gameplay variety that even two weeks in I feel as though I’ve only scratched the surface!

The game offers up 48 songs in total that unlock as you complete new songs, and each song can be played with either the stylus tapping the bottom screen or with the buttons. On top of this, there are multiple difficulty options which dictate how hectic the tapping/button pressing will get as well as how many buttons or tapping locations there are. In addition to this, there are simultaneous button presses as well as moments when you will need to hold down or twirl the stylus or thumb pad about. Suffice to day, with all this variety there are so many ways to play that you could be playing for months before you progress to the super hard modes.

Brace yourself: Puyo Puyo. Released. WEST. Did the world end? No?

That’s right, Hatsune Miku: Project Mirai DX contains a full Puyo Puyo puzzle game entitled Puyo Puyo 39 (“39” being a pun, as “39” in Japanese sounds like “Miku”). This is the real deal! A full-on Puyo Puyo game in which you play your way through stages which get progressively harder. Think of it as Hanagumi Taisen Columns but its the Miku franchise meets Puyo Puyo. Like the main rhythm game, you can earn in-game currency towards costumes and room decor. 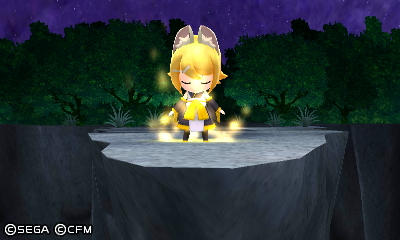 As mentioned, the song selection is vast and it is also varied. While the average Westerner will not understand what the vocaloids are singing, you’ll inevitably find tunes you enjoy and will even find yourself humming and phonetically singing along. I’ll admit, I was excited when I unlocked “World Is Mine”, the Hatsune Miku tune made popular when the holographic live shows first made waves in the United States. Other tunes are overly dramatic, or just plain silly, and each is unique. I won’t say I’ve started listening to music from the game recreationally, but the option to listen to the soundtrack while the 3DS’s lid is closed is there in case I want to take that next step.

I have a whole lot more Miku to experience before the game releases on September 8th and our full review posts on the 4th, but at the moment I can easily see why the franchise has caught on in the West and the franchise just may have made a fan out of me.

Hands-on with Rhythm Thief: Find out why this should be on your radar
3DS Hatsune Miku Hatsune Miku: Project Mirai DX Nintendo 3DS Preview