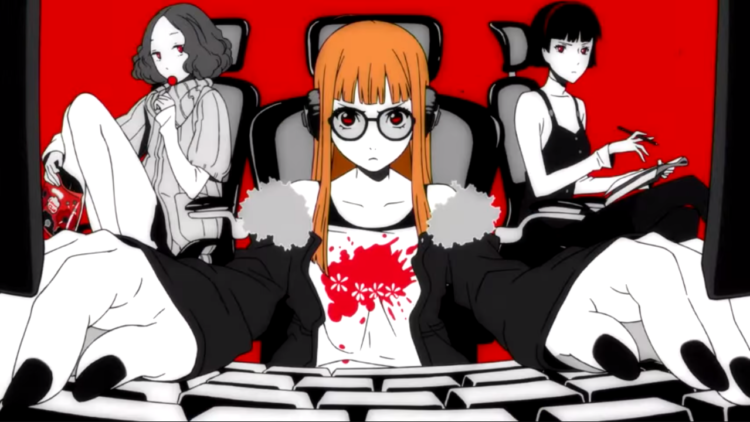 Since this is a Japanese event, the first 18 minutes of Persona 5 gameplay are in Japanese. Still, if you don’t want anything spoiled, its best you DON’T hit play.

Atlus has shown off seven more Cooperation Characters. These are characters that you and your friends will meet. Be it in school or in the city, these people posses special abilities and skills. Their believes align with yours and if you build relationships and mutual trust, you can establish a ‘co-op’ relationship meaning that you will be able to use their abilities.

Hifumi Togo is a young lady that attends Kosei Public High School and holds the female championship title for the Shogi League. According to Atlus she has gained attention as the ‘too beautiful shogi player’ (watch out SJWs). She practices and gives interviews every day for the sake of her mother and for the world of shogi, but…

Toranosuke Yoshida gives out soapbox speeches outside the Shibuya Station. Since he started doing his speeches 20 years ago, he has lost seven consecutive elections. Toranosuke is largely ignored and not many people stop to listen to him speak but his speeches are actually good. He is a serious person confronting the country’s future. His stash reads: “Friendly Society, Bright Future.”

Sadayo Kawakami is a teacher at Syujin High School who is in charge of Class 2-B, which has our main characters as students. You can catch her through class with her unkempt hair and constant sleepy face. On the outside she appears to be a quiet teacher with safety first mentality, but you know how personas are…

Chihaya Mifune is a fortune-teller who runs a stand in Shinjuku. She has a bright and cheerful personality about her, but her fortunes are always correct. People in town gossip that she is a ‘a real fortune-teller’….

Yuki Mishima is a second-year student at Syujin High School and one of your classmates (protagonist). He is a member of the Volleyball Club and always seems to get himself hurt. After a particularity incident, he reduces his distance from you…

Shinya Oda is a elementary school boy who plays at the arcades in Akihabara. He takes pride at his awesome skills on a certain online shooting game and is considered a genius player. He seems to dream of having the power of the Phantom Thieves, but why?

Ichinko Oya is a gossip reporter in her mid-20s and she’ll write any story that sells. She isn’t afraid to manipulate the information in her articles. Prior to her gossip reporting career she was a political reporter who fought social evils, but…

The Mementos Dungeon is a auto-generated infinite dungeon that is separate from the main game. You will be able to explore the dungeon’s vast map while riding Morgana, who can transform into a bus, and the ability to take on free quests.

Atlus has announced that they will be doing eight weeks of Persona 5 TV commercials (in Japan) starting July 25th! The first commerical focuses on the protagonist character.

Atlus has also announced that there will be a Persona 5 web comic on Ura Sunday set to begin the day Persona 5 the video game releases in Japan, September 15th.

It has been teased prior but now we have a date. Persona 20th Anniversary Festival will run from December 8th to the 18th in Arts Chiyoda in Tokyo, Japan.

Atlus also announced that it will be holding ‘hands-on gameplay’ events throughout Japan. Talk about being confident in their product!

The storefront events (10 to 15 minutes of hands-on time):

Persona 5 will be at this years Tokyo Game Show, which will run from its release date on September 15 to the 18th. You can visit their Persona 5 Tokyo Game Show teaser site here.

Persona 5 hits PlayStation 4 and Playstation 3 in Japan on September 15th, February 14th, 2017 for Americas. As for Europe, the game will be published by Deep Silver and there hasn’t been a release date for it yet. Seems that Atlus is really confident in Persona 5, what do you think? Does it look like their best game yet?