Thanks to a post on the Obscure Gamers forum, we have our first look at an unreleased Star Wars game from SEGA for the SEGA Saturn! It has long been known that SEGA had planned a port of their Star Wars Trilogy Arcade game for the Saturn (a game I actually played through just yesterday at the Galloping Ghost Arcade). But in addition to this, SEGA had planned another game exclusive to the console. Titled Star Wars: Rebel Strike, gaming magazines at the time guessed that the game would be an amalgamation of all three Star Wars films, though that sounds very much like what Star Wars Trilogy Arcade already was. My guess is journalists confused the two projects for one, as the recently released beta footage for Rebel Strike shows a very different game.

The footage shows a speeder bike with lock-on targeting, and while free roaming it does very much resemble SEGA’s on-rails shooter Panzer Dragoon. Personally, I think it looks like Luxoflux’s Star Wars: Demolition. It is unknown who exactly developed this, and if it was truly internally developed by SEGA, but based on the test menu mentioning the name “Scott” I’m going to guess it was developed in the west. We’ll be sure to share more information as it is uncovered! It’s very cool to see another Star Wars game uncovered, especially for the SEGA Saturn which lacked any Star Wars games in its library. 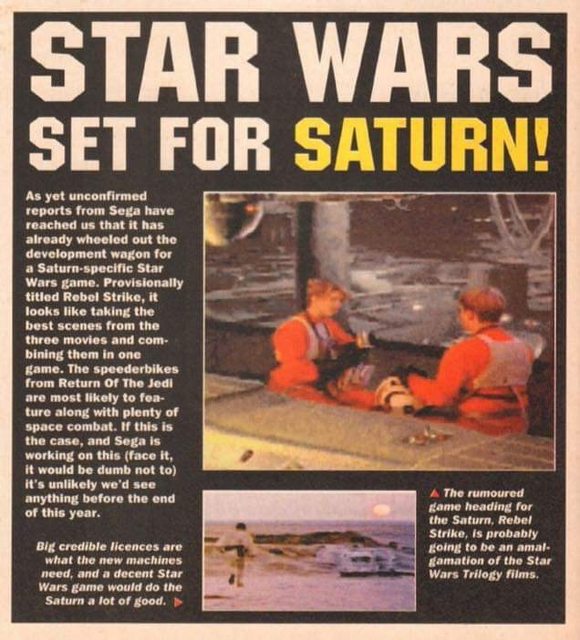