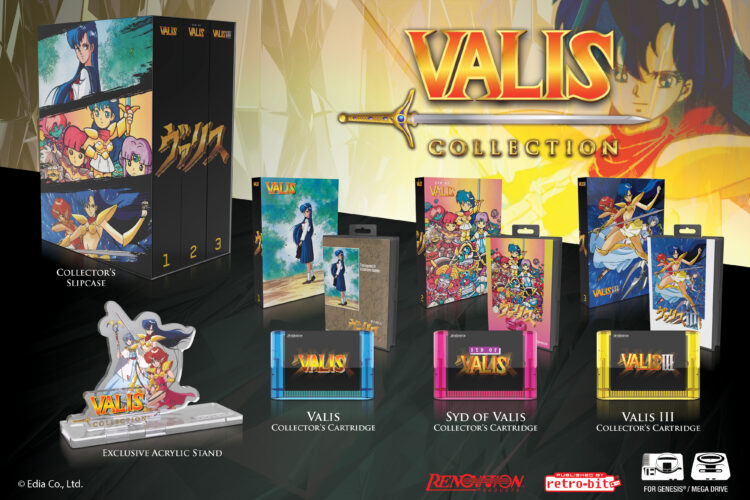 Retro-Bit have returned with a new reprint of Genesis/Mega-Drive cartridge classics. Today they have debuted the Valis Collection, a special box set of the 3 Valis games originally developed by Telenet Japan and published on the Genesis by Renovation. This collection comes officially licensed by the current rights holders to Telenet Japan and Renovation’s games, Edia. Each game can also be bought separately as well, but buying the full collection compiles each one into a special box packaged with an exclusive acrylic stand of the three heroines of Valis III. The collection is very reminiscent of Retro-Bit’s Toaplan Collection from 2020. Pre-orders are now open for North America through Castlemania Games and Limited Run Games until November 27th 2022. Pre-orders for PAL versions will open for Europe at a later date from different retailers. Check out Retro-BIt’s own page on the Valis Collection for the most up-to-date info, including pre-order links and an FAQ page.

UPDATE: Pre-orders have just opened for Europe at Strictly Limited Games, Dragonbox Shop, and Spel o Sant. Links to all three will be added below following the break.

Check past the break for info on each individual games.

Originally released in Japan in 1987 for Japanese computers such as the MSX, PC-8801, and PC-9801, Valis: The Fantasm Soldier is the debut game in this series. It would also be ported to the Mega-Drive, Famicom, and PC-Engine CD-ROM², but only the Mega-Drive version would release internationally.

Valis stars Yuko Asou, a teenage girl in Japan on her way to school when demons from another world suddenly attack. She also finds her friend Reiko acting very suspiciously. Amidst this chaos, the magical Valis sword appears in her hand and teleports her to a fantasy world called Vecanti, currently under attack by Rogles, the demon king, and his dark lords. Yuko becomes the destined heroine of legend and must battle through seven treacherous side-scrolling levels to defeat each dark lord and save both worlds. Along the way, she’ll find several power-ups, giving the Valis sword extra projectile attacks. You may be compelled to explore each level thoroughly to find as many power-ups as you can, as long as you’re sure you won’t run out of time, before taking on the dark lords at the end of each level.

In an unusual twist, Syd of Valis is a comedic, Chibi retelling of the events of Valis II, released exclusively on the Genesis/Mega-Drive. The original version of Valis II was also available on PC-8801, PC-9801, MSX2, Sharp X68000, and PC-Engine CD-ROM². The latter was given a US release on the Turbografx-CD. The Retro-Bit version of this game will feature translated screens that were previously not translated to English for whatever reason, such as the Game Over screen.

When Yuko returns home after her victory against Rogles, she’s enjoying life, eating some ice cream, when demons attack Earth again, this time following Emperor Megas. With the Valis Sword in hand again, Yuko must fight off the demons, then return to Vecanti to save the two worlds from Megas’s wrath. This time, Yuko will find multiple magic shots and outfits that can be mixed and matched for different attacks and defenses. They can be swapped at any moment, so figure out the best combination for each situation.

The Retro-Bit reprint includes the same extras as Valis: The Fantasm Soldier, except for an exclusive art card featuring some of the Chibi characters and a Cham Rose colored cartridge.

No, that’s not a typo. Despite being the 3rd game in the series, Valis III launched on the Genesis/Mega-Drive before its two prequels. The game’s only other release was the PC-Engine CD-ROM², as well as it’s American counterpart, the Turbografx-CD. The Retro-Bit version will restore the in-game sound test, which was removed from the original international release.

After the events of Valis II, yet another demon king surfaces, named Galmes. His goal is to take over Earth and Vecanti to stop the destruction of his own Dark World. Yuko won’t fight him alone this time. She’s joined by rebelling Dark World demon sisters Cham and Valna. Each can be switched out mid-level to handle enemies and obstacles with their own special attacks. They cannot be swapped during boss fights, however, so don’t forget to switch to the woman best suited for battle before confronting the boss.

The Retro-Bit reprint includes the same extras as Valis: The Fantasm Soldier, except for an exclusive art card featuring Yuko, Cham, and Valna and a Yuko Amber colored cartridge.

If you’re looking for a new controller to play these with, consider ordering the Big6 controller, also from Retro-Bit, which is now close to it’s estimated release date as of this writing. (Although none of the Valis games take advantage of 6 buttons, so any Genesis controller will work perfectly fine.)

Will you be picking up the Valis Collection or any of the individual Valis games? Have you played the Valis games before? Tell us all about it in the comments below.