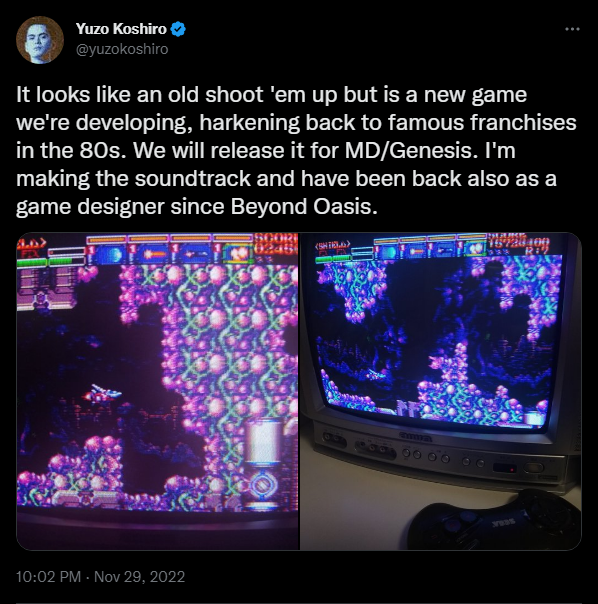 Genesis/Mega-Drive fans are about to be eatin’ good for a while with all the lovely new games, re-releases, and other interesting projects in development for the console. It’s almost like it’s out of retirement. That’s about to  look much more true now that a longstanding developer that’s actually made games for the console in its heyday is now working on a new one for the first time in about 28 years.

Revealed in a tweet by Yuzo Koshiro, who needs no introduction among Sega fans, he and his development studio Ancient (Developers of Streets of Rage 2 and Beyond Oasis on Genesis) are now hard at work on a brand new horizontal scrolling shmup for Genesis. While we don’t know how far along in development this, as of now, untitled game is, Koshiro-san makes it clear this is being made in the spirit of actual official Genesis releases from the 90’s and 80’s and that it will be his first time composing music for a new Genesis game since Beyond Oasis from 1994. (Known as The Story of Thor outside North America).

Hear more about Koshiro-san’s intentions after the break.

The soundtrack and sound effects will definitely go with a native YM2608 driver. It's about the first time in 30 years that I've worked on MD/Gen since I made all the songs for the Beyond Oasis. Of course, there's no CD audio streaming.

Koshiro-san also cleared up a few extra details in the replies of the tweet. On the music, he says “The soundtrack and sound effects will definitely go with a native YM[2612] driver. It’s about the first time in 30 years that I’ve worked on MD/Gen since I made all the songs for the Beyond Oasis. Of course, there’s no CD audio streaming.” Don’t expect this to use the Sega CD in any way then. He’s even added he’s considering either a standard 4/4 beat or a 6/8 beat, apparently typical of old school Konami, for the opening stage’s background music.

We are considering various ideas to release it including selling physical carts.

Finally, as for how you can get a hold of the game for yourself when it’s ready, he adds that “We are considering various ideas to release it including selling physical carts.” He also does not rule out the possibility of releasing the game on newer platforms, but they are making it for Genesis first and foremost. In recent years, Ancient has released games on Nintendo eShop for Switch and 3DS, so if the game is popular enough, you might one day see this on Switch at least.

If that excites you, be sure to follow Yuzo Koshiro on twitter () and keep it here at SegaBits for more info as it comes along. Until then, let us know in the comments below if you’re as excited to play this new 16-bit shooter as I am. Don’t forget to tell Koshiro-san that you’re excited while you’re at it, cause he’s noticed.