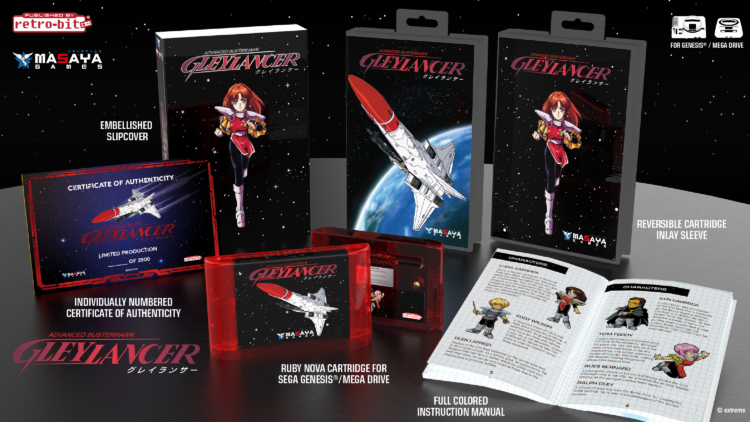 Retro-Bit sure is on a roll now. Hot off their recent announcement of their Valis Collection, Retro-Bit has now announced their official western cartridge debut for Advanced Busterhawk Gley Lancer, one of the most beloved shumup classics released exclusively on Mega-Drive in Japan only. Pre-orders are now open from several different stores in both North America and Europe until December 27th, 2022. North American Genesis fans can pre-order from Limited Run Games and Castlemania Games. European Mega-Drive fans can pre-order from Nedgame, Xtra Life, Dragonbox Shop, Spel & Sant, and Strictly Limited Games.

(They’ve also announced pre-orders for Battletoads & Double Dragon for SNES the same day, but that’s not Sega Genesis, so lets ignore that.)

Check in after the break for more information and a nifty trailer.

Gley Lancer originally released exclusively to Japan on July 17th, 1992 from Masaya Games. Masaya had also created the Langrisser series (The first of which released in North America as Warsong), Gynoug (Wings of Wor to North America), and Assault Suit Leynos (Target Earth to North America). It received mixed reviews in its day, but achieved cult status worldwide in the years since. Like the Valis series, the value of old copies has gone sky high, keeping it out of reach for most collectors and leaving them to resort to reproduction cartridges usually made from parts of cheap, dubious quality or by sacrificing the game data of another official Genesis/Mega-Drive cartridge. Fortunately, the game had received a digital re-release on modern consoles just last year, which is actually quite well made for its price. However, Retro-Bit’s release will be the first officially licensed physical cartridge for original Genesis/Mega-Drive consoles and clones outside of Japan, and premium build quality is assured.

Gley Lancer centered around Lucia Cabrock, a young fighter pilot in the United Earth Federation Navy. She commandeers a prototype super jet called the Gley Lancer to rescue her father, Commander Ken Cabrock, after he’s captured in a sudden attack from an alien fleet. The Gley Lancer comes equipped with two satellite gunners that orbit the ship in one of seven formations you can select from. Several special weapons appear throughout each stage that also complement the two gunners around you. They will prove helpful especially on harder difficulty levels, where the game will pull no punches with its wide variety of enemies and difficult boss encounters.

Gley Lancer was also well known for how it presented its story. The game features intricate anime cutscenes that elaborate on story events, again, very similar to the Valis series. There are also voice clips that play during gameplay. The menus and voice clips were always in English, but the story cutscenes will all be translated as well for the Retro-Bit release, allowing English speaking collectors to better appreciate the gripping, but simple story. The instruction manual, itself lovingly recreated from the game’s original manual, will also be translated in kind.

In the Retro-Bit release, you can expect:

Go to Retro-Bit’s official Gley Lancer page for the most up to date information, as well as pre-order links, an FAQ page, and a press release.

Retro-Bit’s Valis Collection is also still up for pre-order right now until November 27th, this Sunday. If you’ve been putting off ordering those games, act quick if you want it. Maybe pre-order both that and Gley Lancer simultaneously to possibly save on shipping costs.

Have you played Gley Lancer before? Will you be buying this Retro-Bit release? Have you already purchased any versions of the game before? Please let us know in the comments and believe in your power.