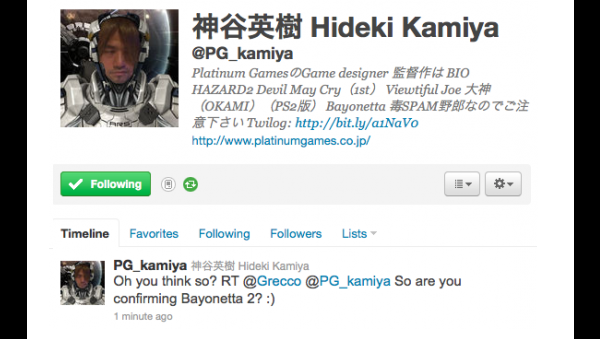 While Platinum Game / Mikami’s 3rd person shooter ‘Vanquish’ seems to have bombed sales wise. (If you didn’t buy it then it’s your fault and I’ll never forgive you.) Hideki Kamiya’s Bayonetta on the other hand did very well for Platinum and Sega.

Easily two of my favorite games this generation, so at least one of them is looking up in regards to a sequel. Kamiya has hinted today on his twitter account that Bayonetta 2 might be on the way!

The teaser comes from a twitter convocation between Kamiya and another guy going by the name ‘Grecco’. Grecco asks Kamiya if it is possible to get the prototype version of Bayonettas character model from the recently released footage of a Bayonetta prototype released as DLC for Bayonetta. Kamiya replied “Perhaps in Bayonetta 2” to which Grecco replied, “So are you confirming Bayonetta 2?”. Kamiya reluctant to give anything away replied simply with. “Oh you think so?”

So not exactly a confirmation, but not a denial either and considering the pretty good sales. I think it’s only a matter of time.