Continuing the Jet Set Radio hype, this week’s Weekly Five will be taking a look at three regional versions of Jet Set/Grind Radio. Those unacquainted with the US, European and Japanese versions of Jet Set Radio may be thinking: “whats the big deal? A ton of Dreamcast titles were released in three regions.” Well, unlike most Dreamcast games, Jet Set Radio had rather notable differences between regional releases. Each version features unique graffiti tags, unique songs, different stages, different character names and voices and even different titles. Of the three, which is the best? That’s what we’ll try to decide today, by comparing five aspects of the games and choosing a winner! Let’s begin.

I should note before beginning that De La Jet Set Radio will not be included in this comparison for a few reasons: I don’t own it and it’s far too expensive. De La is basically the European version rereleased to Japan, with the Japanese voices intact. 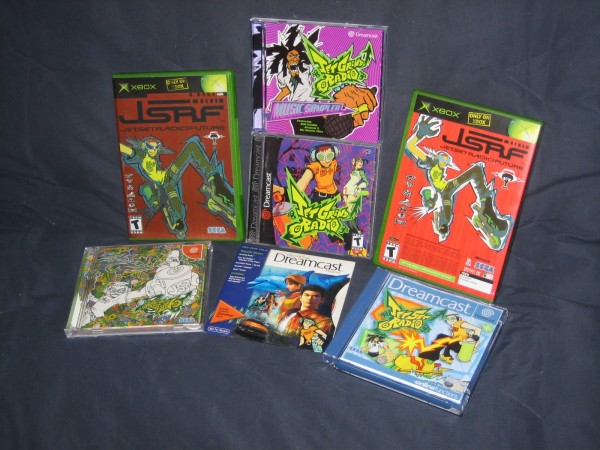 Jet Set Radio is well known for its insane art style, and thankfully the packaging for all three versions reflects that. The Japanese version really has some beautiful art. A black and white drawing of Beat over hundreds of gang logos. The drawing extends to the back of the booklet and the cover is a nice matte paper. The inside of the booklet is full color and features all the gangs and enemies, explains the story and gameplay and even has a bit on graffiti artist Erik Haze. All of this is in Japanese, of course. The American packaging features the retitled “Jet Grind Radio” with Beat and Gum and a purple background on the cover. This is the only cover to feature another GG aside from Beat. The inside of the booklet has everything the Japanese booklet had, but in English and in black and white. 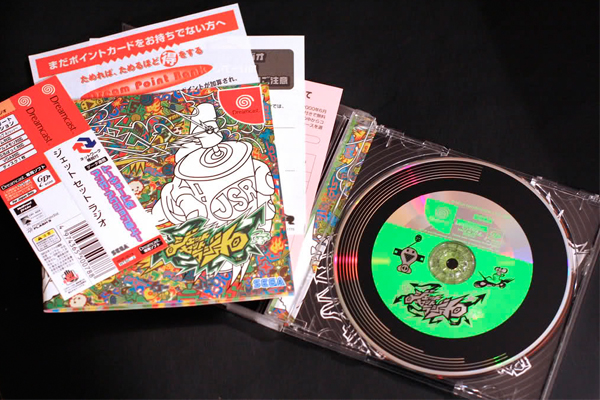 The European version is in the typical bulky European double wide case. I always loved these, mainly because they’re so unique. Not your typical CD case, the Euro Dreamcast cases actually had the Dreamcast logo imprinted into the case. The cover art is decent, but it my least favorite of the three regions. I never liked the massive blue Dreamcast logo bar running across the top and bottom of PAL games. It takes up 1/4th the cover! I do like the drawing of Beat, and it’s cool to see Professor K on the front. The booklet is massive, to make room for all the different European languages. It has all the content of the US version and is also in black and white. GD-ROM’s for all three have a similar but different design, echoing a record with the inner circle as a label and the outer part in black with white stripes mimicking record ridges.

Best packaging goes to… the Japanese version. The art is awesome, the paper quality is really nice and I always love a full color manual. Even if I cant read it, it’s a beauty to behold.

The main reason I purchased three versions of Jet Set Radio were the musical differences. Music is a major deal in Jet Set Radio, and the opportunity to hear new and unique tracks in each version of the game is both a real treat and a different experience. When Jet Set Radio was said to be released in America and Europe, fans were nervous that SEGA would remove and replace tracks from the game. Early issues of the American Official Dreamcast Magazine even dwelled on this possibility and soon revealed that this would not be the case. However, ODCM also revealed that songs would be ADDED to the soundtrack including tracks by Cold, Rob Zombie and Mix Master Mike. Fans were uneasy about this news, but were happy that the Japanese soundtrack would go untouched. When Jet Grind Radio released, I was happy to find that all these new tracks were confined to the new stages (more on those later). Rob Zombie invading the Japanese stages was not a worry. Despite saying that the Japanese soundtrack would go untouched, one song from the Japanese version was removed: Deavid Soul’s Dunny Boy Williamson Show. Who knows why it was removed. Perhaps its not catchy enough? Or one song had to go to make room for the additions? Who knows. It’s a decent song, and you can hear it above. I don’t miss it, but I don’t know why it was the only cut.

While all gameplay elements from the Japanese original are maintained in the English versions, there are some subtle and some major differences. The English versions are said to fix bugs found in the Japanese version, but I’ll admit that I don’t know what exactly was fixed. I assume these glitches were graphical. The biggest issue of mapping the “center camera” and tagging to the L-trigger goes unchanged. Players will note that the loading screen features scrolling “NOW LOADING…” text and the stage timer shows milliseconds, making the pace to appear faster as the milliseconds quickly count down.

The biggest gameplay additions are two brand new areas that only appear in the US, European and De La Jet Set Radio versions of the game. The two areas are Bantam Street and Grind Square. Bantam Street resembles a Chicago or New York neighborhood street with an elevated train (a Chicago staple) and store fronts resembling New York. This area is small, but fun. My favorite elements are a three story building with break away windows and the train track. Grind Square is an obvious homage to New York’s Time Square. It’s a cramped stage that really opens up as you climb higher. However, expect to fall a LOT when you play this stage. 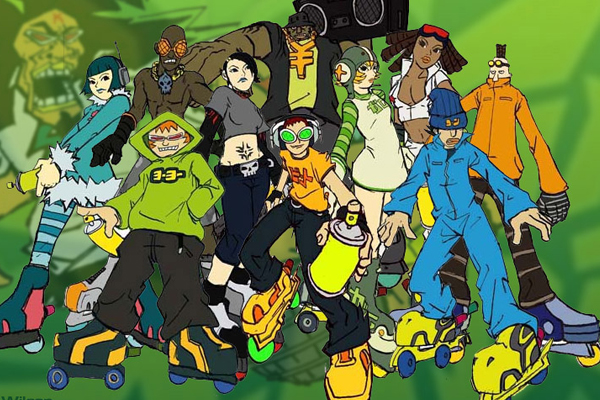 Jet Set Radio has never been known for its story, but it does have one and most SEGA fans should know it. Basically, you and your gang of graffiti tagging inline skaters take on the police, rival gangs and the Golden Rhino mafia in order to figure out why the mafia’s leader is trying to reconstruct an old broken record. This plot is the same in all versions, however with the addition of the Grind City stages a few new plot elements were added. Combo and Cube (who has a redesigned outfit, probably to look more American) are now Americans who traveled to Tokyo-to for help. Seems their third gang member, Coin, was kidnapped by the Golden Rhinos. Coin left Cube and Combo graffiti messages instructing them to consult the GG’s for help. And… that’s about it! The Grind City addition just sort of appears and disappears. Coin is never found, he’s assumed dead, and the game concludes as it did originally.

Best story goes to… the Japanese version! The Grind City addition, while fun to play, offers little new story and goes nowhere. The original version of the game, meanwhile, skips the whole thing and offers up a filler-free plot. 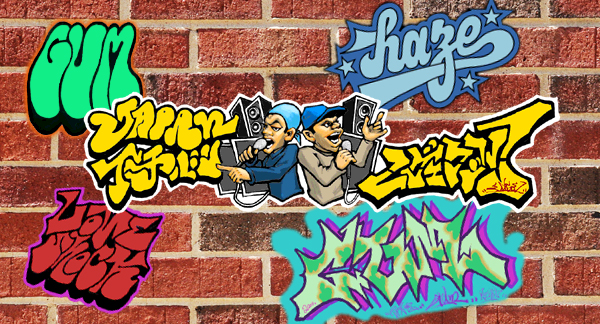 Like music, graffiti differs from version to version. The Japanese version of the game features tags with the original names of the characters, sometimes in katakana, while the English version redesigns these tags so they reflect the new names. So Bis is now Mew and Corn is now Tab. The American version features logos from the bands appearing as music additions, while the European version swaps out band logos for the music artists found on the European version. Regional graffiti contest winners also have their art featured in their region’s respective games.

Best graffiti goes to… all three regions! Art is subjective, and I really can’t say that one region has better graffiti than the rest. Each game has its own unique art not found in another game making each game’s graffiti selection special.

And the winner is… 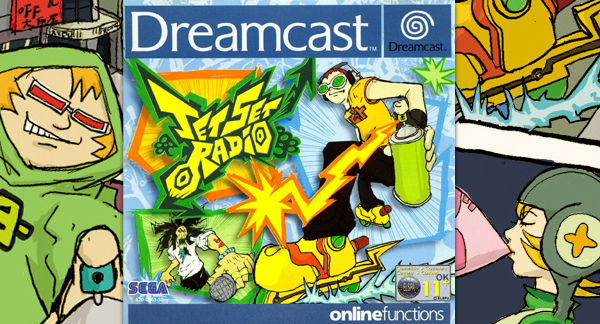 The European version! Why? Well, it has all the additions and bug fixes PLUS the best soundtrack additions AND retains the original title. Those who counted may have noticed that it was actually a tie between this and the Japanese version, but in the end I thought more content wins out. The ideal version of the game is De La Jet Set Radio, if only for the original Japanese voices. But given that De La sells for over $100, you’re better off saving your pennies and getting the PAL Jet Set Radio which sells in abundance online for insanely low prices. $6 for the best regional version out there? Hell yes you should buy it!

SEGA Five: How to be the best Dreamcast collector that you can be
Dreamcast Jet Set Radio The SEGA Five The Weekly Five Weekly Five