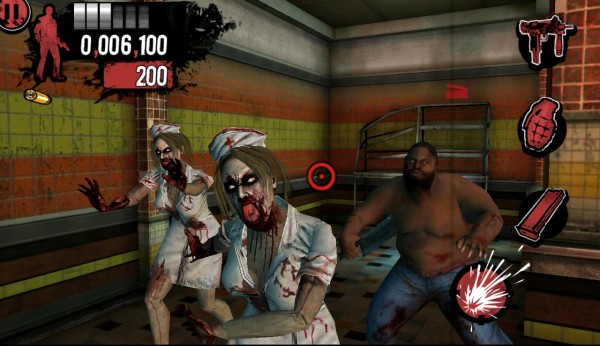 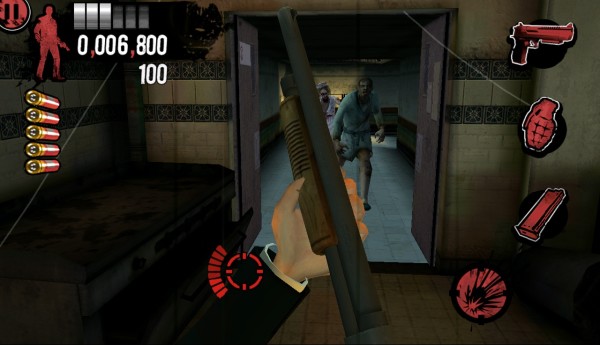 Given that The House of the Dead is a light gun game, the transition to touchscreen devices was a risky one. Thankfully, for the most part, the game controls quite well. Players are given three options, the first being a virtual d-pad with a fire, reload, and change weapons button. The second option uses the device’s accelerometer, allowing you to move the sight around by tilting and tapping to fire. The third option, which remains locked until you complete the game, is a tap the screen to shoot mode. Of the three, I found the virtual d-pad to be the most enjoyable. While tilting the device is a bit closer to light gun gameplay, it was difficult to use this method while in public and on moving vehicles. The third mode was just too damn easy, reminding me of the days when I’d hold the light gun right up to the screen to cheat. I can still hear the sound of plastic clinking against the glass of the television screen.

Thanks to the size of the screen, there is a lot less area to move the sight about with the d-pad, so what was a pain on consoles is actually far better on the small screen of a mobile device. It may not be true light gun gameplay, but it is still easy to control. 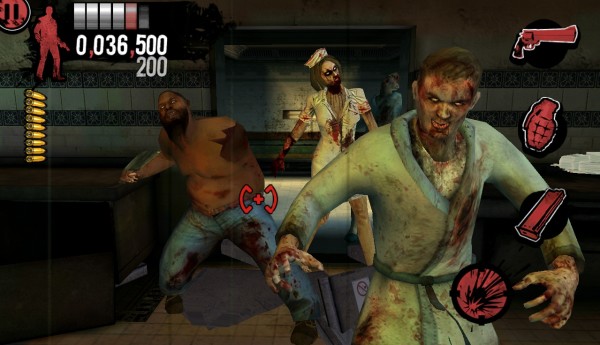 If you’ve played any The House of the Dead game, you’ll get into the game immediately. All the series staples are here. You take an on-rails trip through creepy surroundings, hoards of mutants come at you, and you take them out before they take you out. Head shots are the ideal way to kill, killing the mutants instantly and doling out the most points. A string of kills will net you more points, and stages are littered with goodies including health packs, grenades, the “Slow Mo-Fo” which briefly slows down time, and the in-game currency “Kash”. Kash is obtained via completing stages, the grade you receive, in-stage “Kash” pickups and, as is the norm in mobile titles, you can buy Kash with real cash. The game’s shop allows players to buy new weapons, upgrade existing ones, pick up additional power-ups and gadgets and more. Perhaps the coolest gadgets are weapons inspired by other SEGA franchises including Vectorman’s Ball Gun and Shinobi’s Ninja Stars complete with onscreen 16-bit hands and sound effects.

Perhaps the coolest gadgets are weapons inspired by other SEGA franchises 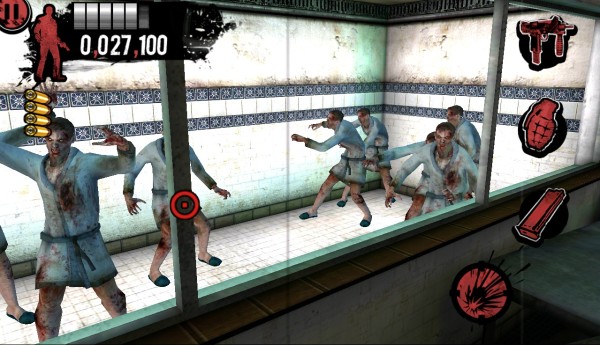 Graphics are surprisingly good for the mobile platform, even moreso given the small file size of the game (99.5 MB). They may not be as good as the PS3, or even the Wii, but they retain the game’s gritty look and are effective. Music is lifted from the original game, giving that sleazy 70’s feel to the game. Perhaps the biggest negative I’d have to lodge against the game is the loss of player dialogue. Mutants still moan and weapons still make satisfying firing noises, but gone are the witty one-liners and between stage banter that made the console versions so fucking lovable. Players have the option to choose between Agent G, Isaac Washington, and Varla Guns, but aside from seeing a different pair of hands reloading your weapon, there is little difference between characters. I questioned if it was a case of cutting back on the swearing, which is possible, but players still drop f-bombs in the static text-based cutscenes. Despite the loss of dialogue, the game itself is still fun, it just lacks some personality.