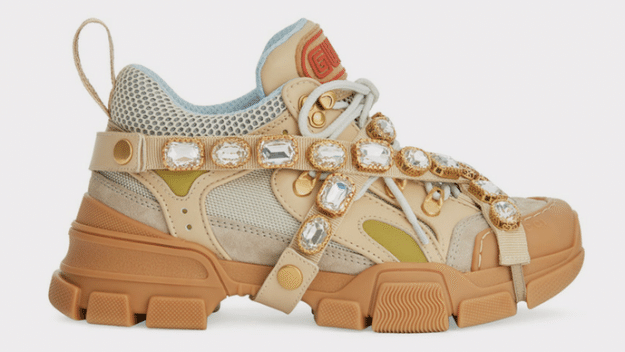 Yeah, it’s a slow news day. Set to release in July are a pair of Gucci sneakers that bizarrely use the SEGA logo lettering for the Gucci name. With prices starting at $1430 and up, you’re sure to be the envy of nobody when you walk into a room wearing these ugly things. Covered by the website Geek.com, it is noted that the shoes take some “some not-so-subtle nods to the game Bejeweled“. Which would make sense if SEGA developed or published Bejeweled, which they don’t.

Even stranger, the official Gucci instagram account makes note that the SEGA font is used with permission of SEGA Holdings Co., Ltd. However, as we’ve pointed out before, it is more likely Gucci is using the fan made font NiseSEGA which makes it clear on the download page that these fonts cannot be used for business. Of course, that didn’t stop Mr. Robot from using the fan made font. It’s a shame that when illustrated fan art is misused, people raise hell – but when fan art in the form of fonts is misused nobody bats an eye.