More scans for the up coming Sega/Platinum 3rd person shooter Vanquish. Naoya Tsurumi recently spoke openly about Vanquish saying that Sega will be giving it a big push this year. This already suggests great faith in a quality game.

Scans and Summery below.

Scan summery for the lazy,

-Does not play like a western 3rd person shooter.
-Hard in a challenging way but not impossible.
-Faster paced then any other 3rd person shooter.
-Lots of visual flair, lots of things happening all at once.
-Giant mechs you can use, Turrets etc.
-Giant enemy robots.
-They hope the Melee combat will be more fleshed out in the final product as
they didn’t feel the need to use it much but it was visually very cool.
-Weaponry transforms with transformer style visual effects
-The HUD is almost non existent
-It almost feels like you get into a rhythm when you play, hard at first but once you’ve got that rhythm it suddenly clicks.
–You have AI friends on the battle field that actually matter unlike other shooters where they end up being stupid cannon fodder, you can heal them.
–No Multiplayer at all, they felt that they wanted to spend 100% of their time on making a single player game. 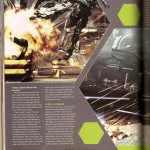 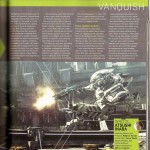 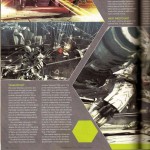 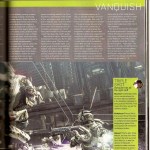 One response to “New Vanquish Scans”