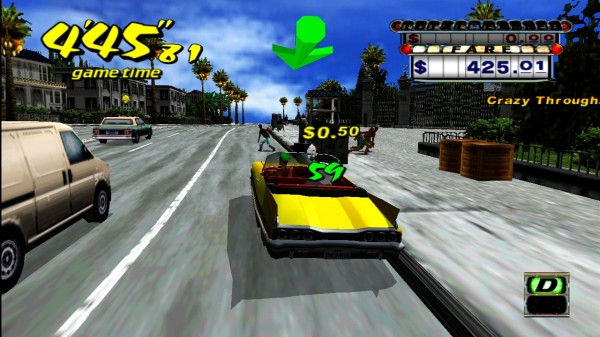 Aside from Shenmue and, perhaps, Sonic Adventure, Crazy Taxi is the most iconic franchise the Dreamcast every produced. So it comes as no surprise that the original game has joined Sonic Adventure as one of the first games in the Dreamcast revival SEGA is now pushing. Everyone here knows how the game plays: you play a taxi driver who drives people to far away locations in ridiculously short amounts of times, throwing every traffic law to the wind in the hopes of getting the largest fair possible from the customer.

What you guys want to know is, what has changed. Honestly? Not much. While the original Sonic Adventure and it’s Gamecube port where rather buggy games, Crazy Taxi was a rock solid game to begin with. That said, the only real improvement here are the HD visuals: the game is more bright and colorful then the original game, but that is about it. Even the texture pop in is still there, which is a tad disappointing, but then again this game is still a long way off from release, so we’ll see what happens. In addition to the slight graphical improvements, there will also be a leader boards feature, something that should work out well for a score attack game like this.

Overall, Crazy Taxi is as good as it always was. For people who haven’t experienced the game before, that is a very good thing.