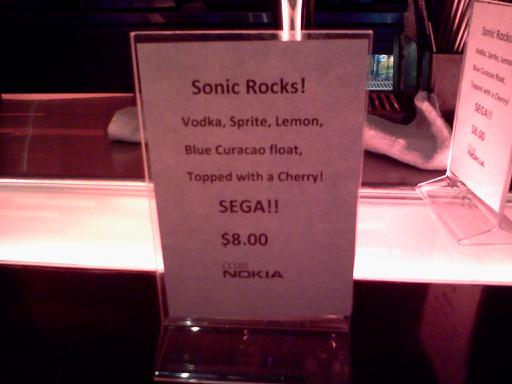 First thing’s first. Sonic Generations was the star of the show and demo kiosks for the game were all over the place. They had stations for both the 360 and PS3 versions, and then they had 2 stations where you could put glasses on and give the game a shot in 3D. Getting to play Sonic Generations for the first time, I can say that Sonic fans definitely will not be disappointed. In fact, I’ll go as far as to say that pending any unpleasant surprises, this might very well be the best platformer in a long time. The visuals are incredible: it’s almost mindblowing how great this game looks from a technical perspective. Artistically, Sonic Generations of course aims to feel familiar to long-time Sonic fans, but at the same time contains things that we’ve never really seen before in Sonic. The giant…whatever that thing is that chases Modern Sonic in Green Hill Zone, is the perfect example of fresh and inspired enemy design, and I definitely hope we see more things like that in the final product. Classic Sonic controls exactly like you’d hope he would. This is how Sonic the Hedgehog 4: Episode 1 should have controlled if it didn’t suck ass, and while it’s slightly different from the Genesis games (a tad faster, especially when you trigger the spin dash) people who played Sonic back in the day will instantly feel at home, both with Classic Sonic’s animations as well as the way he controls. Classic Sonic’s levels are mostly platforming-based but with some speed thrown in; really, the perfect balance for 2D Sonic.

Modern Sonic plays pretty similarly to how he did in Sonic Unleashed but with a lot more paths through the levels and what felt like a bit less emphasis on boosting. His controls seemed to me to be less slippery than in Unleashed and Colors and the experience is all the better for it. I especially liked that they moved Sonic’s homing attack back to the A-button (360 controller) as opposed to how it was in Unleashed, where it shared the X-button with the boost. The camera does a great job at keeping up with Sonic, and it actually follows him pretty aggressively through the loops, adding to the sense of adrenaline I felt when playing as him.

I also got to try the game on the 3D TV, and still, I don’t understand why Sony is so intent on selling 3D as a means to play video games. I found it to be disorienting and it added very little to the experience. Plus, the framerate took a huge dive on the 3D TV, and people around me were noticing the lag. 2D television is, at this point, still definitely the best way to play Sonic Generations, and probably all video games, to be honest. 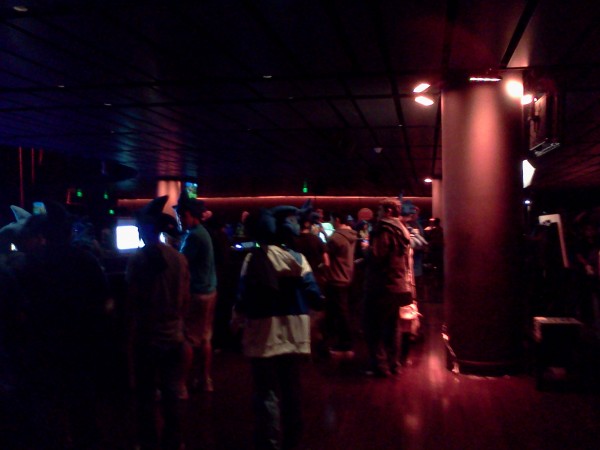 Now for the event itself; from the start, Sonic Boom felt like it was all about pleasing the fans. Though he hasn’t worked on the series in years, Yuji Naka was on hand to greet the fans and sign autographs. Takashi Iizuka, as well as Sonic Generations’ director, Hiroshi Miyamoto, were also present. At one point, they and several of the SonicTeam Japan staff who were involved in the creation of the series all those years ago took to the stage in front of a giant and elaborate Sonic cake (which I’m still not sure was a real cake) for what turned out to be a pretty heartwarming moment.

There were other noteworthy moments that took place throughout the party, including a performance of truly “wtf” proportions from a group (in pretty awesome costumes, I have to say) who apparently won a contest back in the Project Needlemouse days. There was also a demo speedrun contest at the event, as well as a costume contest for those who dressed up. The bar was open throughout much of the night, and though the drinks were unbelievably expensive, ($8 for a can of beer? No thanks) I did actually end up paying that price for the Sonic drink whose description is in the pic at the top of this story, and it packed a decent punch. Since it was so expensive I passed on getting more drinks, a decision I seriously regretted when I learned that Crush 40 was about to perform. 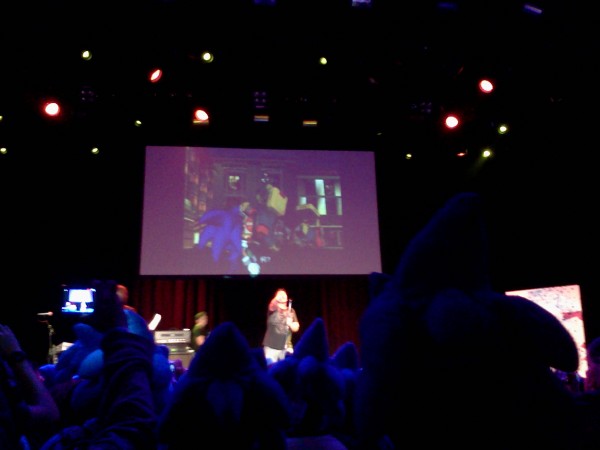 Yup, Crush 40; Singer Johnny Gioeli and of course classic Sonic composer Jun Senoue on the keyboard and guitar were there to perform a series of songs from several different Sonic games, with video of each game playing on a screen behind them as they performed the track. Crush 40….what can I say, the band’s always been incredibly corny and that certainly doesn’t change when seeing them live, but damnit….as much as I hated to, I found myself singing the words to the songs as they played, and for what they are, they’re actually not terrible live, to their credit. They even had Alex from Cash Cash (he did the piece of autotune…I mean, music, that played during the end credits of Sonic Colors) show up to perform that song, and if nothing else, I learned for the first time that autotune can indeed be done in a live setting. Some of the songs played included Super Sonic Racing, His World, Open Your Heart, the Sonic Free Riders theme song, Sonic Heroes, new remixes of City Escape and Green Hill Zone, Sonic Boom, and, of course, Live and Learn. I have to hand it to SEGA, they really pulled that one together. 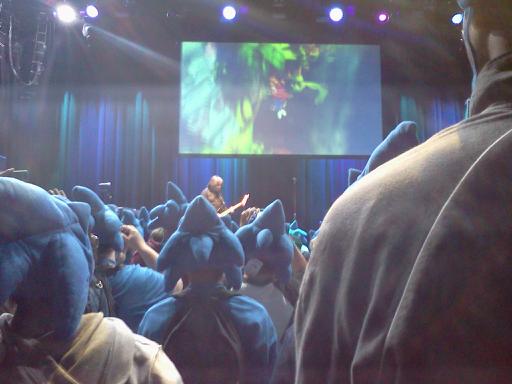 There were other fun things throughout the night. Fans all got to cheer “HAPPY BIRTHDAY SONIC!” which will apparently be featured somewhere in Sonic Generations. Aaron Webber did a pretty good job as host. There were free cupcakes with blue frosting. The same screen that displayed the video footage during the concert also displayed tweets made throughout the night, and once some guests got wind of this, they immediately began tweeting some, well, not quite PG-rated things. This one gets special mention, it went something like:

I saw Sonic beating the shit out of Robotnik and then smoking a blunt behind the Staples Center.”

Overall, I have to say, SEGA put on a fun party. It may have been a little cheesy at times (something that’s probably inevitable, given the series itself) but the event was definitely successful at appealing to all audiences, both young and old, something that I’m sure Sonic Generations aims to do, if what we’ve seen so far is any indication. Sonic Boom felt like a huge love letter to the fans and I think everyone there definitely appreciated it, myself included.

Sonic Generations is set to release this holiday season on the PS3, 360, and the Nintendo 3DS. A demo will be headed to the PS3/360 downloadable services in the near future, and it’s a lot of fun, so definitely give it a download whenever that ends up happening.

13 responses to “Sonic Boom: Impressions from the Sonic fan event”