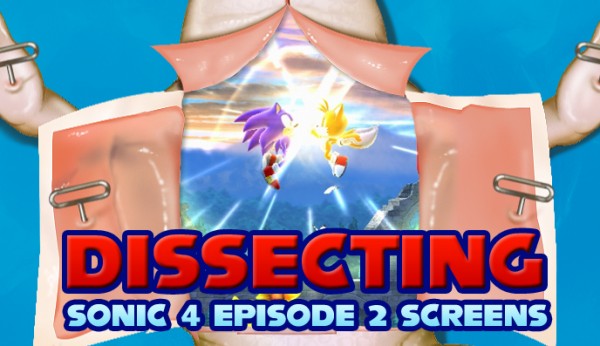 Yesterday XBOX.com let slip ten Sonic 4 Episode 2 screens. Before Microsoft could pull the info, Sonic and SEGA fan sites from all over the net had saved, uploaded and shared the images to the point where SEGA might as well just allow the images back up and give us a trailer while they’re at it. [Update: it seems they have, the images are back on XBOX.com] The screens, found here, reveal a number of details that had yet to be mentioned by SEGA. After the break, let’s slice open these meaty screens and see what little details we can find! 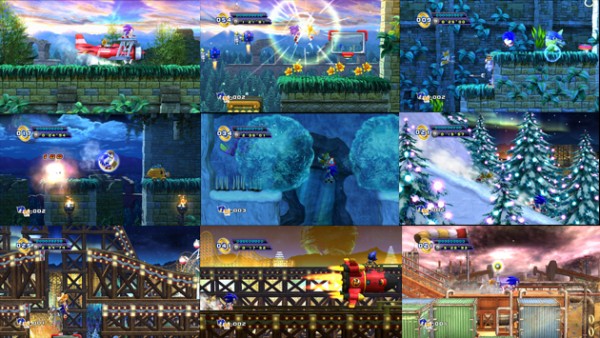 Sonic 4 improving on an aspect from the classics? Say it ain’t so! One of the more exciting aspects of the leaked screens was that it appeared as though the zones not only visually progressed act by act, but there may also be visual progression between zones. Take a look at the image above. The top row features the presumed first zone, an Aquatic Ruin homage. The first act appears to take place at sunset, the second or third act takes place at night. The background features pine trees and it appears to be lightly snowing in the second image. As night falls, the stage goes underwater and it seems that things begin to get chilly, as ice formations are thrown into the mix. 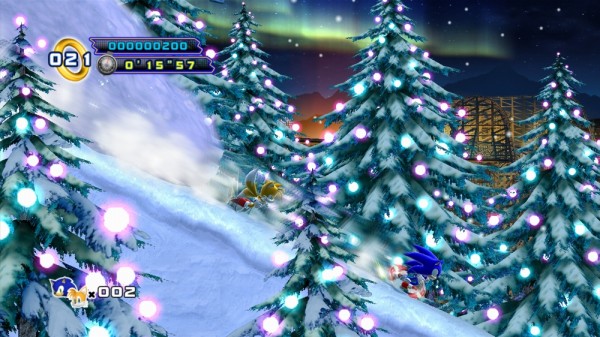 This may lead into the second zone, a frozen amusement park, as Sonic and Tails are seen escaping an avalanche through a snowy pine tree filled forest. Both the pine trees and snow were hinted at in the Aquatic Ruins. As the amusement park stage progresses, you’ll note a planet in the sky being overtaken by machinery (more on that next). In the earlier nighttime screen in the Aquatic Ruin zone this same planet can be seen but with less machinery surrounding it. As the amusement park screens continue, Metal Sonic shows up and the night sky has grown darker. Finally, we see a sandy oil field stage. This screen is a bit more removed from the rest, but given the past progression, I imagine the roller coaster chase segues into this stage.

When Sonic CD was rereleased, it was touted as being “where Sonic 4 began”. Most fans laughed this off, but it appears that Sonic CD may have more to do with Episode 2 than we thought. Not only does Metal Sonic play a part, but it looks as though Eggman’s master plan in Sonic 4 is to build the Death Egg around Sonic CD’s Little Planet. Pretty epic stuff, and a great way to tie Sonic CD into the numbered titles. But why would Eggman do this? Simple: Little Planet has the ability to appear and disappear, and is home to the Time Stones which, as Doc Brown said, “is what makes time travel possible.” A time travelling Death Egg? Pretty badass if true. As noted in the last section, the Death Egg appears to be being built as the game progresses. In the presumed first zone it has a bit of a structure and the red eyes, while the second appearance in the presumed second zone shows Death Egg Planet with more mechanical sections and a defined nose and moustache. I’d assume by the final stage the construction will be complete and the end boss fight will take place on the surface of the mechanical planet.

Who is in Control? 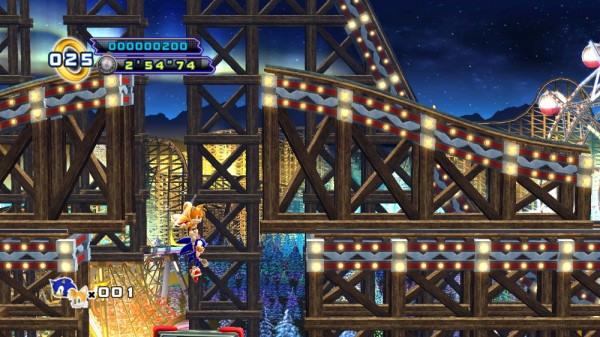 One of the bigger reveals from yesterday was that Episode 2 will feature co-op gameplay, including combo moves. We see a few of these moves in the released screens, but one question is just what sort of configuration are the players playing in? Given that the screens aren’t always centered around a single character, it could be that this is co-op gameplay. One clue is that while Sonic appears to be player controlled, Tails is seen airlifting Sonic. Unless a single player can control Tails as well as Sonic for some aerial assistance, these screens could be showing off two player gameplay. I’d prefer the latter, as the idea of having both Sonic and Tails under the control of one player brings back memories of Sonic Heroes. “We need to get up to that platform. Leave this one to Tails.”

In the comments, share any tidbits that you may have found in the screens.

Arts and Crafts: Make your own Sonic 4 Episode 2 Genesis box, manual and cartridge!