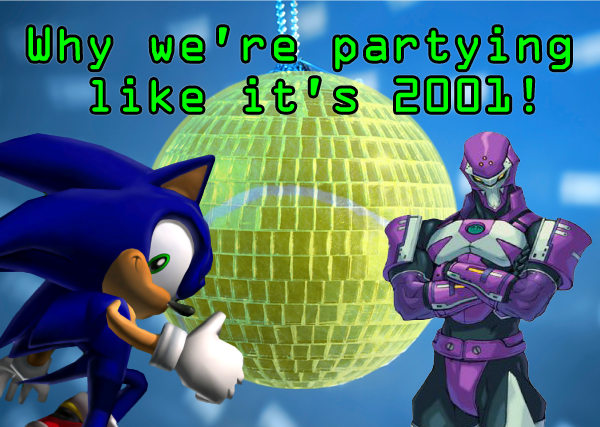 After releasing a well received game, Sonic the Hedgehog returns for another adventure with an anniversary title. Fans are excited to hear that the game improves on weaker aspects of pervious games and features a return of Green Hill Zone.

Now I’ll bet you’re thinking: “What’s Barry talkin’ about? 2001 or 2011?!”. Then, you slap your forehead with the realization that I’m referring to BOTH years. For the first time since 2001 it feels like an upcoming Sonic title will deliver exactly what the developers promise and will improve on past elements of the series. Sonic Adventure 2 did away with adventure field fetch quests and trimmed the fat of Big and Amy gameplay. Sonic Adventure 2 wasn’t the perfect game, but it was great fun and improved upon the first Sonic Adventure.

Now, spin dash to 2011. Many enjoyed the day stages of 2008’s Sonic Unleashed (note: I did not say “all”, so don’t freak out in the comments section) and 2010’s Sonic Colors was a very enjoyable title. Both games had their problems, Unleashed had the Werehog and Colors had some slippery 2D platforming. With these problems in mind, Sonic Team revealed Sonic Generations. Generations is looking to be a love letter to fans, offering up classic zones and characters. What more, many problems of past games seem to have been addressed. QTE’s have been thankfully dumbed down to joystick wiggling, 2D platforming has been refined and non-Sonic gameplay looks to be nowhere in sight. Unless, of course, Generations offers up “Classic Sonic the Werehog”.

In 2001, SEGA released the much anticipated sequel to Virtua Tennis (Power Smash in Japan). Virtua Tennis 2 (Power Smash 2 in Japan, Tennis 2k2 in the USA) introduced the ability to slice and brought female tennis stars to the game. While not a complete reinvention of the first game, it was a great sequel and has since become the much preferred of the two Dreamcast titles.

Ten years later, SEGA introduces a new sequel to the series: Virtua Tennis 4. The second HD title of the series (Virtua Tennis 2009 was more of an upgrade to the third title than a full sequel) Virtua Tennis 4 introduces optional motion controls and 3D television support to the series. World Tour mode, a defining aspect to the series, has been given a complete overhaul and now plays out as a sort of board game. Another new element to the series is the “super shot”, a quick and precise shot executed after a guage at the top of the screen fills.

Virtua Tennis 2 was a small improvement over the first title, as it is difficult to improve on something so perfect as the first Virtua Tennis. Virtua Tennis 4, while not yet released, looks to have the same sort of comparison to the third title of the series. Gameplay may not have been reinvented, but then again it really doesn’t need it. As long as controls are refined, graphics improve, the roster is updated and world tour is a blast, Virtua Tennis fans have much to look forward to in May, 2011.

As the Dreamcast was on its way out, SEGA relased a number of great multiplayer titles. Games like Ooga Booga, Outrigger and Alien Front Online stepped away from the usual online sports and racing game and gave gamers online multiplayer games that were unique, hectic and fun. While SEGA has released a number of online titles since the Dreamcast days, it hasn’t been until 2011 that they really stepped things up and offered some unique online games.

The announcements of Anarchy Reigns and Renegade Ops brought to mind the Dreamcast days of multiplayer titles. Ooga Booga and Anarchy Reigns may be worlds apart visually, but they look to share the same spirit of crazy multiplayer combat. Both Alien Front Online and Renegade Ops share much in common, as both titles deal with online vehicular team combat. Instead of army against aliens, we have renegade operatives against terrorists. It may not be SegaNet, but it’s something.

Do I really have to say more? At the beginning of 2001, the world came together to play Phantasy Star Online. In the months that followed, few thought it could get any better. And then came Phantasy Star Online Version 2. Yes, it was an upgrade that came about less than a year after the original, but at the time I don’t recall batting an eye at shelling out more cash for the features offered in Version 2.

While the previous four were comparisons, this is definitly a contrast. As mentioned in the intro, back in 2001 we had it made with games but were sad to see the Dreamcast go. Now, in 2011, the general mood of a SEGA fan is far more positive. Most of us have accepted SEGA’s label as “publisher”, and those who have are reaping the benefits of great new games and the return of many classic franchises.

SEGA’s lineup in 2011 sure has that great feeling of 2001, but the sad vibes are nowhere to be found!