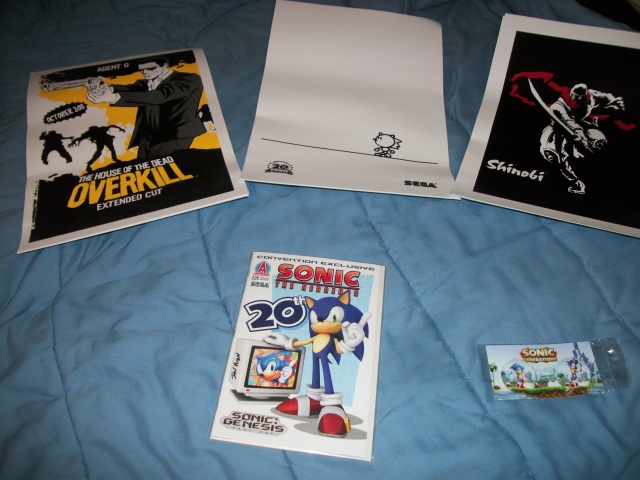 With a lot less entries than over at TSS, we finally got a winner! I’m not gonna post some finalists like over at Sonic Stadium since the amount of posts was considerably less. However, we did get some new readers from Sonic Stadium as I recognize some of their posts. To everyone who entered, thank you so much. I’m glad to see so many new readers.  To those who came from TSS and lost, THANKS FOR THE EXTRA HITS SUCKERS! (Kidding! Kidding!) It seems most of you were excited for Sonic Generations the most and so was the winner. So who won?…

He was a finalist on TSS, and his post almost won over there, but it outdid the competition here. Here’s his winning post.

The games I’m looking forward to in the holidays? None other than Sonic CD and Sonic Generations of course! Sadly, I didn’t grow up my whole life with Sonic the Hedgehog. But I immediately fell in love with the franchise as soon as I first boarded down ridiculous declines in City Escape once I had the Gamecube for my birthday, and that sense of exhilaration being chased by that hedgehog roadkill hungry GUN truck? I’ll never forget that pounding in my heart then. Before I moved, I used to be a part of a little league baseball team [cute, huh?]; I’ll forever remember my baseball coach as Coach Kevin [we were the Cubs!]. One time, we had a party at my place and he brought his kids over. His daughter lent me her pink GBA and I first played Sonic Advance. But when I finally had a Sonic game of my own, SA2B… over all other franchises, I felt hooked. No, I became hooked. Addicted. Head over heels, I fell in love with the Sonic franchise and wanted to play more. Hell, I spent over 250 hours on Sonic Adventure 2 Battle, nearly 300! I already got all the emblems, but was that an excuse to put it down? No. And I still play it to this day. Over the years, Mega Collection was added to my… collection [I HATE repetition!] and then I was exposed to the Genesis goods, Sonic3&K becoming an immediate favourite! To this day, I played nearly each and every Sonic title already conceived; Sonic CD is the only real one I haven’t really had a chance playing, so I’ll gladly pay double for it, for at home through the Xbox Live Marketplace and on the go [thank you iTunes!]! I’ll finally get the chance to experience Sonic CD! Metal Sonic’s debut and that race through Stardust Speedway that everyone keeps talking about! The different ways to beat the game, through Good Futures or Time Stones, or just run through a metallic madness of a Little Planet if I feel like it! Generations, on the other hand, I and nearly every other Sonic fan, long time and new, young and old, will share the same feelings for that wonderful blue hedgehog on November 1st, and by December it will be worldwide. Sonic Generations isn’t just a game, it’s a celebration of all the fun that we have been provided, of that sense of gaming that no other franchise can provide, of everything Sonic and what’s made Sonic the Hedgehog still unstoppable to this day. And I wish to enjoy it with everybody. Hell, to some this could be their very first Sonic game! Like 1991, why not start off with a blast for everyone? I don’t see Sonic Generations as a gathering of all Sonic fans: it’s the start of a new generation altogether. Some fans have been around since the beginning and Sonic still has plenty more coming. With Generations being the culmination of everything Sonic, there’s no way people can’t enjoy this title. Sonic Generations, I count down the days until your release with great anticipation!

Jeffhog, PM me your address either here on the Segbits forum (Shigs) or at the TSS forums (Jasonthejackass). Thanks again to all who entered!!

SEGA going to Gamescom this year