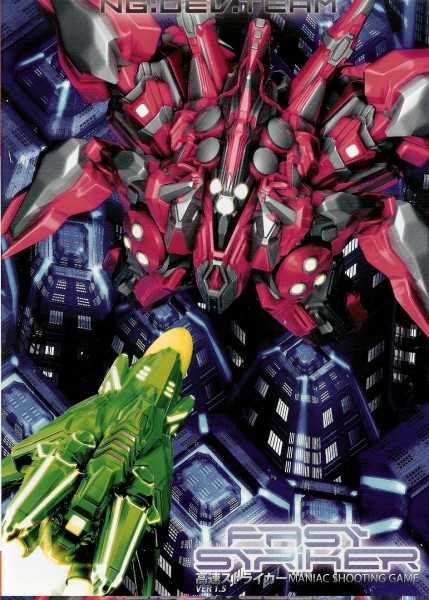 [Cover of the standard edition]

Fast Striker was developed by NG:DEV.TEAM for the Neo Geo MVS, later it was ported to the Dreamcast. This review will cover the Dreamcast port. This is going to be the first indie review for the site, I hope you enjoy it. 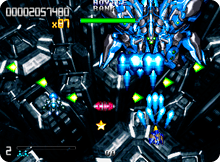 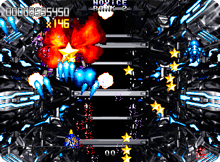 Something that most people will be expecting from Fast Striker is tons of bullets on screen and the game doesn’t disappoint. The game advertises it has up to 180 bullets on screen, something that I believe while trying to get through the game. It is relentless at times and will probably make you want to throw your controller at the screen.

The game is a vertical shooter much like Radiant Silvergun or Ikaruga. Fast Striker gives you a basic three button layout – forward shooting, backwards shooting and a shield. Tapping the shooting button (either forward or backwards shooting) gives you a wider shot, while holding down the button gives you a ‘narrow’ shot that is more powerful. So switch accordingly to the enemies on screen. 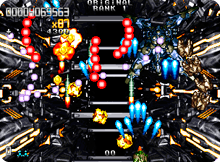 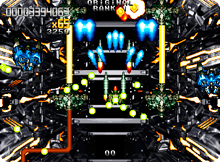 Shields  will save your life in this game, especially as you go on to the later levels. You will be able to see how many shields you have on the bottom left hand corner of the screen. Dodging bullets is your best course of action, but sometimes the screen becomes so filled with bullets that it’s just not possible to avoid them. You can pick up more shields as you play through a stage, so monitor how many shields you have at all times.

The game sadly only features 6 stages, so it’s rather short. Though it seems that this genre really is known for having shorter games, since they are basically arcade titles. Fan favorite Ikaruga only featured 5 stages, so this kind of length isn’t really much of a negative in this genre. Even though it is only 6 stages long, the game offers four modes of play: Novice , Original, Maniac, and Omake (exclusive to the DC port and the hardest mode!). The only issue I would have with the length is that all of the levels basically have the same ‘dark & space’ feel. I know its suppose to be a sci-fi shooter, but why can’t it have bigger changes in scenery to feel less monotonous? 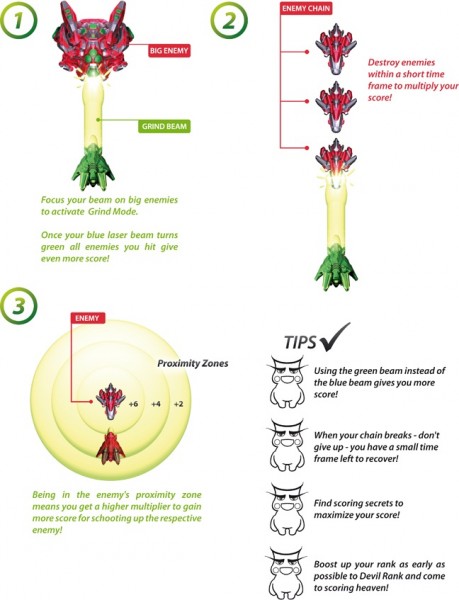 The Maniac/Omake modes seem to have the most unique ranking system, compared to Novice and Original. You will have to replay them to find the best way to get your grinding multiplier high, since the higher it is the higher your score will be. To continue the multiplier you will have to keep on shooting down enemies. The faster you kill one after another the more points you get. So try to chain up kills. Also the closer you get to the enemy before you kill them, the higher the score.

It really does take a lot of tries to master and get a decent score, no wait, screw the score; it takes a lot of time to even survive in this mode. The bullets, the screen is full of bullets! 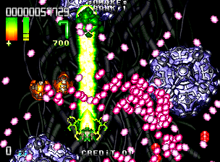 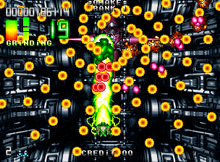 [Yes, that many bullets]

Something you will notice about the game right away is that it isn’t the best looking Dreamcast game. Its not ugly,but its not as good looking as other titles that have graced the console. The reason? Well, the game was built for the Neo Geo MVS, which is a 20 year old piece of hardware. You really appreciate the look of the game more knowing that.

Yes, this is the best looking Neo Geo game that I have seen. The backgrounds have depth and the enemies come in lots of varieties. Developers stated they have over 40 unique enemy types. I didn’t count them while playing since I was too busy blowing them up, but I wouldn’t doubt it. 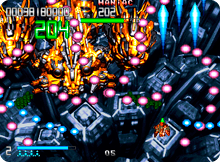 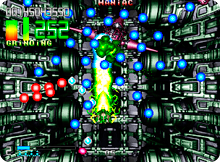 It also has a ton going on at once. With CGI bad guys shooting over 100 bullets at you at any given moment, it can get very dense. The game has four times more bullets on screen than any Neo Geo game before it. The game also has the largest megabit count for any Neo Geo title ever, clocking in at 1560 MEGS. In the end its a very impressive Neo Geo game, but on the Dreamcast, compared to other shooters on the system, it only looks okay.

The game features a pretty good soundtrack, featuring some good ambient music and if that doesn’t make your heart race, some  trance beats. I’m not much into trance, but the tunes on here are still pretty damn good and go well with the game. Gets you very pumped up. If you buy the limited edition version you get the soundtrack disc. 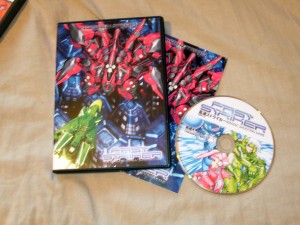 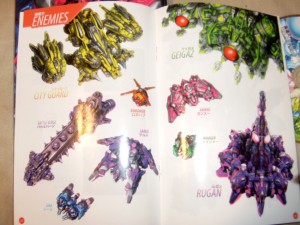 The packaging for Fast Striker is rather impressive, it is actually better packaging than most ‘standard’ editions of SEGA games (that they publish right now). The game comes in a standard size DVD case, which is sort of odd since Dreamcast used CD sized cases. Though I think that the ‘keep case‘ design is probably the best thing to happen to video games. I always hated jewel cd cases, they broke so damn easy.

The ‘instructions manual’ is rather short, but in full color. Something that SEGA doesn’t do anymore, since all their manuals are in black and white now. The manual has your standard look at the controls, stage list, artwork for enemies, and credits to the people at NG:DEV.TEAM that slaved away creating this title. 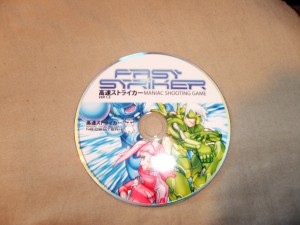 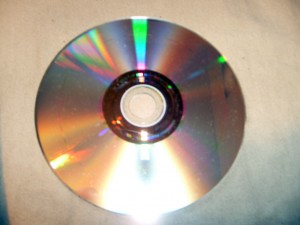 The cover has a ton of Japanese characters on it and if I didn’t know better I’d assume it was an imported game (which it sorta is, since it’s made in Germany). The packaging doesn’t have Japanese characters just for show though, it also has them because the game is region free, and every single print run is sold worldwide. I’m not sure if this game is printed on a GD-Rom, but it doesn’t matter since you can’t tell the difference. It looks like a legit Dreamcast game.

A feature that this game has is ‘online ranking’. Most commercial Dreamcast games didn’t do this! The way it works on here is when you get a score, the game will give you a code, you use that code on this website to submit your score. This is actually a lot easier then hooking your Dreamcast online, especially since I don’t have a broadband adapter and don’t have a phone line at my house, thus dial up isn’t an option. 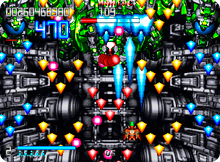 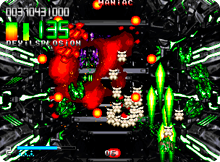 NG:DEV.TEAM has delivered a fun shooter for the Dreamcast years after SEGA left the console for dead. Even though this game was made with the Neo Geo in mind, its still damn fun on the Dreamcast and shows that you don’t need the latest graphics and physics to deliver a great title.

The game is on the short side with 6 levels, but most of the games in this genre are short. The game offers 4 modes of play, some aimed at the hardcore gamer and easier modes for the other gentle souls. The game has a good trance soundtrack, tons of bullets on screen and tons of enemy designs to blow up. It’s disappointing that the backgrounds kinda blend in and all look similar, but if you’re a fan of Ikaruga, you have to play this game, the unique scoring system will keep you in isolation for hours.