Panzer Dragoon is, in my opinion, the best Saturn title available at launch. Beautifully rendered 3D graphics, addicting arcade-style gameplay with one of the most exciting soundtracks ever recorded. It also appealed to hardcore gamers, creating a challenging experience even on the easiest setting. 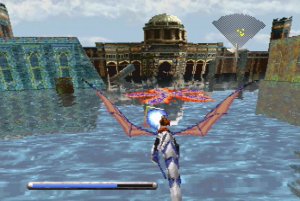 Less than a year later, Panzer Dragoon II Zwei took everything that made the original great and improved upon two-fold. Stunning 3D and 2D graphics that riveled even the best displays from Sony and Nintendo at that time, showcasing high-resolution textures with colorful, vibrant sprites and fluid animation. Again, all accompanied by a gripping soundtrack. The refinements didn’t end with Zwei’s flawless presentation. Skilled gamers were rewarded with a ranking system that actually increased your dragon’s strength and stamina, and it made use of the Saturn’s internal battery, allowing gamers to save their progress. Team Andromeda took it even further by fleshing out Dragoon’s mythos, expanding on the incredible universe they created with the first.

In addition, if you reach 100% completion or clock 30-hours of gameplay this unlocks a special ‘CHEAT’ menu called “Pandora’s Box”, giving you access to “Space Harrier” mode and so much more. An alternative method to accessing “Pandora’s Box” is having a saved game from Panzer Dragoon Saga/Azel. How about that?

Panzer Dragoon II Zwei embodies everything I love about the Saturn. Arcade-like thrills with imaginative visuals, great music and gameplay that will keep you hooked long after you’ve beaten the game. 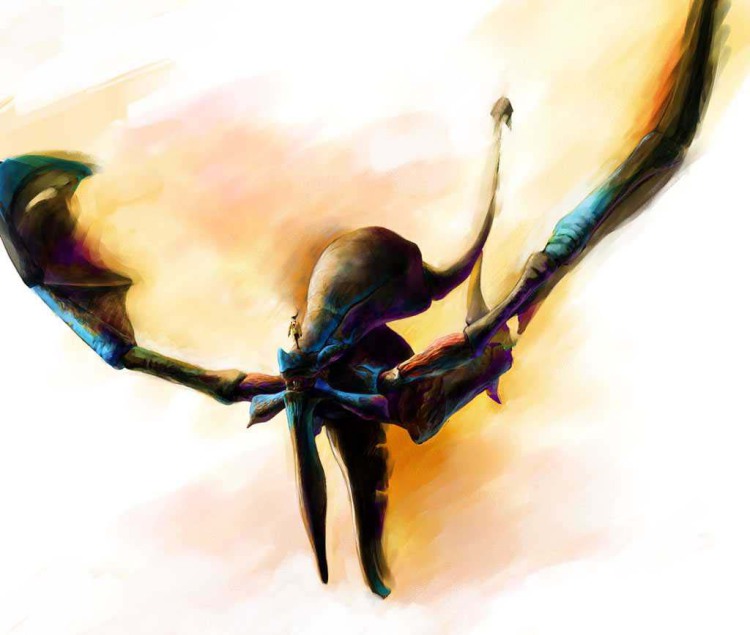 Its not that hard for me to choose which game is my favorite SEGA developed Saturn game, since I sort of wrote about the game in our 2011 round table titled ‘Our favorite Sega Saturn games’, which I choose the always highly praised Panzer Dragoon Saga. Personally I adore the whole Panzer Dragoon franchise, each title was awesome and of course had an amazing artistic presence that really got me growing up. I remember this was one of the first games I actually looked up information about the art and read all the information I could about the artist Jean Giraud (aka Moebius), the French artist behind the inspiration for the art style in the games. I even wrote a Monday Memories article on the the art. 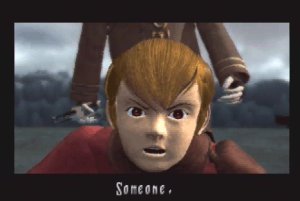 Panzer Dragoon Saga is one of those games that make me love and also hate SEGA all at the same time. It is a prime display of SEGA’s internal team prowess but also at their inability as a publisher to capitalize on their own creation. I mean, isn’t it said we haven’t had a new entry into the Panzer Dragoon series for 12 years? That’s crazy. But we can day dream about a new Panzer Dragoon Saga game, can’t we? I sure did in an old Sequel Saturday article. 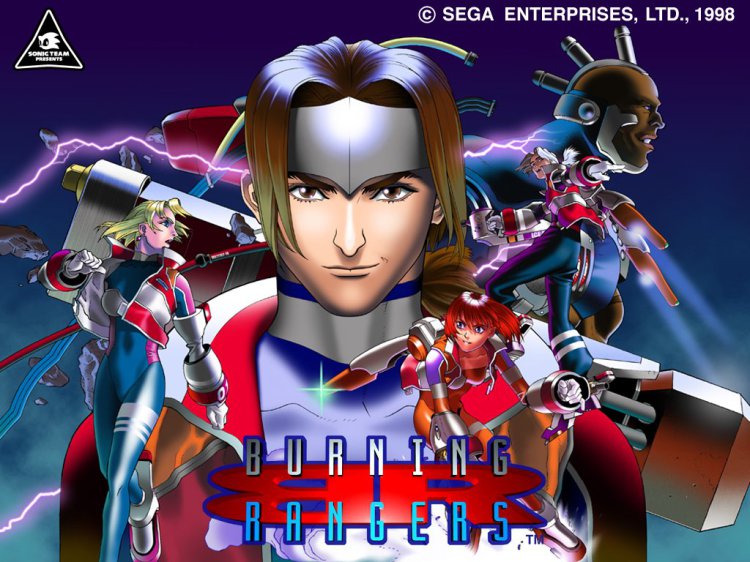 My favorite Sega developed Saturn game has to be Burning Rangers. I mean, a game with that good of a theme song just can’t be bad! Burning Rangers was a really unique platforming/action game for the time.
You controlled characters that were part of the “Burning Rangers“, who were basically firefighters in the future. Your job was to put out fires and rescue civilians. 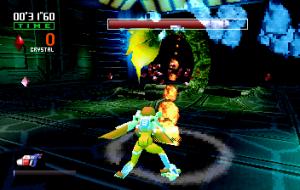 In order to do this, you would need to put out fires that would give you crystals. You used these crystals to power some sort of transportation device, that would send the civilians out of harm’s way. If you took damage, you would lose crystals, and if you had no crystals, it was game over.It sounds simple, and it is, but it can be difficult to master. Not only that, but even though the game only has 4 missions, once you’ve beaten the game, a host of new characters opens up, as well as randomly-generated levels.

The game for the time looked beautiful, featured lots of dialogue and was just a really unique game from Sonic Team! 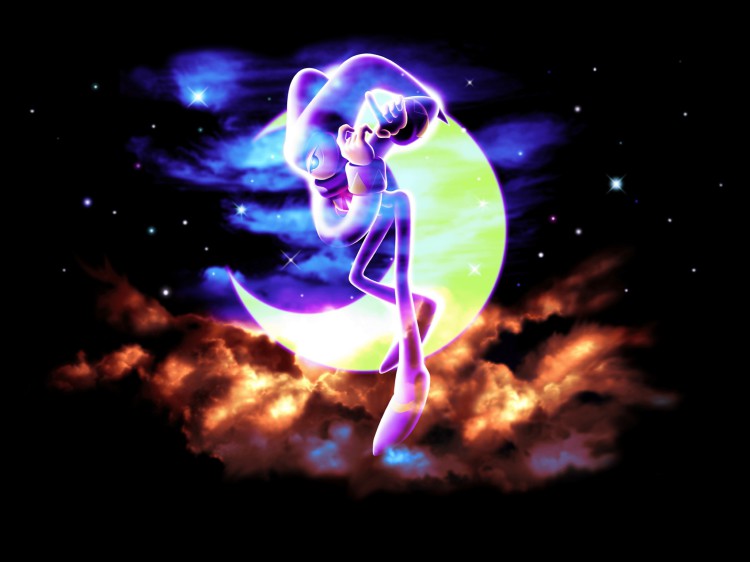 NiGHTS into Dreams is a game I had something of a complicated history with. When I first tried it, I didn’t really know what to make of it. I mean, flying around, collecting blue chips, and destroying these big “ideya capture” things? Where’s the fun in that? I simply didn’t really care for it, even after several sessions with it, and I didn’t really get why anyone else did either. NiGHTS is not a game where the mechanics and goals are readily apparent, mostly because there isn’t any kind of tutorial mode and there just isn’t anything else like it. 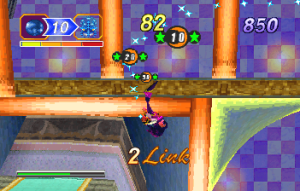 That is one huge reason why NiGHTS remains not only my favorite Saturn game, but also one of my favorite games period. Even today, there really isn’t anything else like it, despite how much critics praised it back in the oughts. Though really, I would be doing the game a disservice if its uniqueness is all I praised it for. NiGHTS simply feels great to play. It feels wonderful to soar through the game’s side scrolling stages, looping around enemies, blasting through rings and collecting blue chips. It feels even better when you manage to link all of those things together for huge combos and massive points. From here, this is where we get to what the meat of the game is: the points and the tricks. 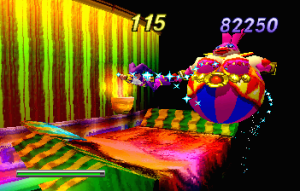 A lot of people like to classify NiGHTS as a platformer, because of its connections to Sonic Team, but this game shares very little in common with its elder sibling aside from an emphasis on memorization and speed. In this game you aren’t trying to just get to the end of the stage as quickly as possible. You’re trying to get to it while doing it as stylishly as possible, squeezing out every single second in the timer in order to get a few extra points before reaching your goal, and either moving on to the next goal or ending the stage. Playing through a stage, mastering it, learning every trick and short cut a stage has to offer, and accomplishing the perfect run using all of that you’ve learned from repeated playthroughs, that is another thing that makes NiGHTS great. This isn’t a game you just play once and throw away, like a lot of the cinematic blockbusters released these days. This is a game that revels in practice and replayability. This game may only have seven stages, but I’ve put dozens upon dozens of hours into it over the years, trying to improve my game. 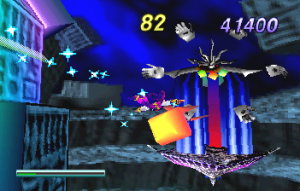 Even though the game’s selection of stages may be slim, they also represent the pinnacle of Sonic Team stage design. This is what Sonic Team level design used to be like (and on occasion, still is). One stage features an underwater area in the side of a mountain, another features a massive tower of metal girders and floors, and another has soft ground that moves and bounces when you hit it. Every single stage in this game is creative and crazy and still look cool even today, even if technologically this game is incredibly dated.

NiGHTS into Dreams essentially sold me on the idea of “score-attack” arcade-style type games. In many ways it pretty much convinced me to begin playing SEGA’s entire arcade library. When I first tried it in 2003 I didn’t know what to make of it, since by that point it was graphically dated, analog controls were nothing new, and I had really only played games with plainly explained or obvious objectives. It took me a year to understand the deeper aspects of NiGHTS’s mechanics (when I finally decided to go ahead and read the manual) and my gaming tastes have remained all the richer for it. It may no longer be the top reason to own a Saturn anymore, but if you do have a means of playing it I would recommend you give it a go. You might find the same magic I did. 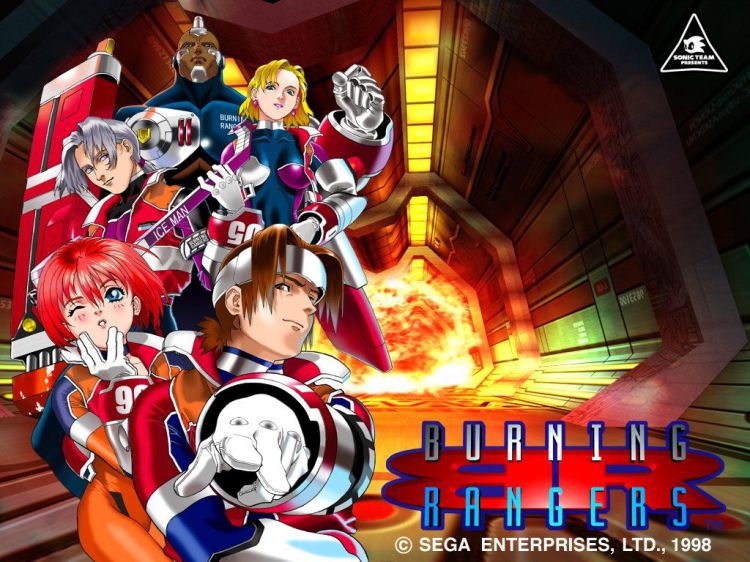 Since NiGHTS and Panzer Dragoon have been talked about to death, I’m gonna have to go with Burning Rangers. One of Sega’s last published games on the Saturn and a rare treat. The best way to describe the game is that it basically has the Resident Evil gameplay and camera mechanic, but it’s about fire fighters in a not-so distant future. The game was colorful, fun and had a very catchy theme song. The biggest downer is it’s rarity. finding a used copy could cost you up to $200. You can import it, but since there is a lot of spoken dialog and you have an assistant telling you where to go next, playing the much cheaper Japanese import would be extremely difficult.

I find it insane that Sonic Team did two non-Sonic games, but never released an actual new Sonic game on the Saturn (not counting Sonic Jam).

6 responses to “Round Table: Our favorite SEGA developed Saturn games”