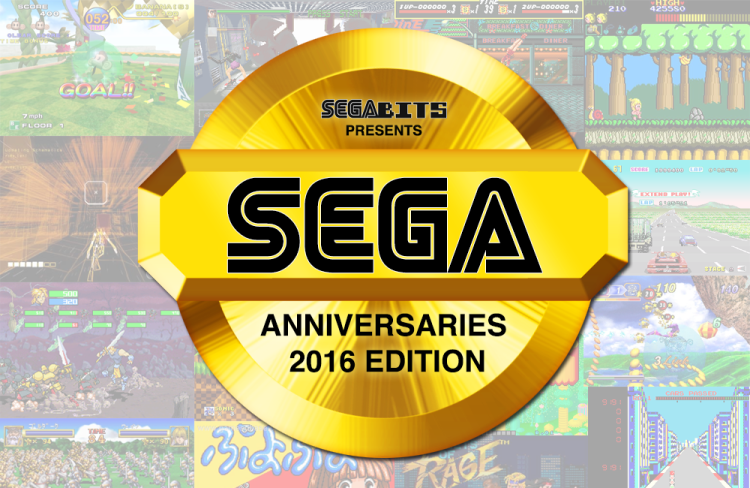 We will be posting original articles and content to celebrate each game’s anniversary. Mark your calendars!

While true, Super Monkey Ball is technically the follow-up Monkey Ball that was released in the arcades the same year; we decided to roll with Super Monkey Ball due to it actually having a release date and it being immensely more popular than its arcade predecessor. Super Monkey Ball was one of the first big post-console SEGA games and first appeared on the Nintendo GameCube on September 14, 2001. The game takes aspects of Marble Madness and Labyrinth, adding pitch perfect controls. You know what they say, once you’re in a Monkey Ball, no one call hear you scream.

The franchise’s first couple of games (which are really the best ones) happened to be directed and produced by Toshihiro Nagoshi who has now moved on to the never ending Yakuza franchise. The games earned a big following and critical praise. Come September, we will have more monkey business going on this blog and we hope you join us.

Rez is one of those games that totally flew under the radar for most people, especially in America where it didn’t get a release for the Dreamcast. Rez mixes the rail shooting genre with electronic music to deliver a really unique game that still has quite the cult following.

The game was conceptualized and produced by the famous ex-SEGA developer Tetsuya Mizuguchi and the short lived development team called United Game Artists. I hope you’re ready to plug into the network this November as we celebrate Rez‘s 15th Anniversary with some exciting new content.

You have to give credit to SEGA for allowing Sonic Team to do something else, especially when their console at the time, the SEGA Saturn badly needed a big brand name like Sonic. They delivered NiGHTS into Dreams…, which sadly never got as popular as the blue blur. This game showed that the SEGA Saturn could do 3D, and also showed the skills of Sonic Team as a creative developer. I can’t think of anything like NiGHTS that exists and its probably the best aging SEGA Saturn games as well.

Join us July 5th when we celebrate the purple jester’s big 20th Anniversary.

Sadly the arcade version of Die Hard Arcade (Dynamite Deka) didn’t have a solid release date during 1996, so we made a date for it to serve our purposes. Yes, we are evil and you should hate us. The arcade did actually get released in November, so we aren’t the worst people in the world. Die Hard Arcade was a beautiful joint project of SEGA AM1 and Sega Technical Institute, even though one developer was from Japan and the other from the United States, they worked together on making one of the most popular arcade games in SEGA’s history. It is considered SEGA’s most successful US-produced arcade game.

Yippee ki-yay and you know how that goes. Join us this November when we lock and load some original content to blast through your eye sockets. Wait, did I go too far?

While most people know the Shining Series for their Shining Force entries, Shining Force wasn’t the start of the franchise. Before the franchise went into the SRPG genre, they tried to create a dungeon crawling game and thus we have Shining in the Darkness which is often overlooked.  This game does take place in the same universe as Shining Force and even has Dark Sol as a villain, who has appeared in a number of titles in the series.

This would also mark the first game created by Camelot Software (then called Sonic! Software Planning), this is also the second game by famed producer Hiroyuki Takahashi (previously worked on Dragon Quest II). So come this March, prepare to grab your shield and sword because we are going to re-visit the Kingdom of Thornwood!

Do I really need to talk about Sonic the Hedgehog to you guys? Sonic the Hedgehog alone swayed SEGA’s place in the 16-bit console wars, delivering a mascot that embodied what it meant to be cool in the early 90s. The character has evolved during his 25 years and managed to stay relevant even if some of his past games have been mismanaged. Very few mascots from that era can say the same.

You can expect us to not only cover SEGA’s celebration of the blue blur’s 25th Anniversary, but also expect new content come June.

Streets of Rage (aka Bare Knuckle in Japan) took the side-scrolling beat ’em genre that was pioneered by games like Double Dragon and practically defined the genre. Streets of Rage became the premier game in its genre thanks to the awesome directer/designer Noriyoshi Ohba and the unforgettable music of Yuzo Koshiro.

While the franchise remained untouched after the 16-bit era, the games still has left nostalgic bruises on all the fans that played the series during its heyday. The police will never help you, so join us this August when we take on Mr. X and pay tribute to a great SEGA franchise.

ToeJam & Earl took SEGA Genesis/Mega Drive players into a surreal world filled with humans! In this game you play as a duo of alien rappers who crash land on a strange world called planet Earth filled with strange human creatures. ToeJam & Earl is a funky dungeon crawler/rogue-like inspired game full of action and surprises at every turn (did we mention presents?).

Brush up on your 90s urban culture and Californian slang because come this September we will be diving backing into planet Earth to talk about ToeJam & Earl. Wait, we are on planet Earth…

We are a big fan of SEGA’s puzzle franchise Puyo Puyo, last year we did a big retrospective on the franchise which included covering the original studio Compile. While the franchise might have started as a non-SEGA exclusive, it is now one of the few older franchises that SEGA Japan still regularly updates – which says something for the legacy power of the Puyo Puyo brand name.

So come October, join us as we celebrate 25 years of Puyo Fever!

What can I say about SEGA’s ultimate cute ’em up shooter known as Fantasy Zone. First of all its hard to believe this niche franchise is turning thirty years old and its just insane how well the first game aged after all this time. Sure, it has pitfalls that most arcade games of the era have like being unforgiving when it comes to difficulty, but I think that was one of the main appeals when it came out. We obviously loved the franchise so much that we basically made Opa Opa our moscot for the site, check out our logo!

Come March we will be taking you back into the Fantasy Zone to relive one of the most unique franchises in SEGA’s long history of software creation. Are you ready?

I’ll admit we haven’t done much content in the past when it comes to Wonderboy/Monster World but that’s mostly due to the fact that the franchise is sort of all over the place. This will give us a opportunity to cover a franchise that not only is underrepresented online but also innovative in its own ways. The franchise has made such a impact on people that there is literally a spirtual successor in the works right now.

Come this April we will dive sword and shield back into Monster World!

While Yu Suzuki‘s first sprite scale game was Hang-On, Out Run is the title that put him on the map. It was a huge step up from where he started and the game had amazing attention to detail that wasn’t really seen much back in 1986. Out Run took the racing against the clock aspect introduced from Hang-On while adding the ability to choose your own path while driving. This gave the players freedom that not many ‘racing games’ had at the time. Yu Suzuki was against calling the game a ‘racing game’ and considered it a ‘driving game’.

Come June we will be celebrating the 30th Anniversary of one of the greatest SEGA arcade games ever created: Out Run!

Alex Kidd was created to take on Mario and be a mascot for the SEGA Master System. Sadly this didn’t pan out for the little dude, as five years after his creation he was replaced by a blue hedgehog. But not all things end negatively because there is still a lot of great things that the Alex Kidd franchise did, for example Alex Kidd was one of the first SEGA franchises to have a cross over in Alex Kidd in Shinobi World. To a lot of early SEGA gamers, Alex Kidd defined the SEGA Master System experience.

Join us November as we talk about Alex Kidd and all his mysterious adventures from Miracle World to Shinobi World, we got you covered!

Turbo? Yes, Turbo. While it wasn’t huge in its impact outside of SEGA, it was one of the very first games that tried to accomplish what SEGA-AM2 will later perfect half a decade later, a racing game with sprites coming at the player. As SEGA-AM2 called ‘sprite scaling’, the idea had to have a origin, right?

Come October we will be taking a inside look at one of the most forgotten arcade games, Turbo. Come celebrate with us!

What is your favorite franchise that is getting an anniversary? Any other game we missed in the list? Let us know in the comments and we will add it!